Down in the depths of our storage room are boxed-up pieces of
our childhoods. There’s a blue Rubbermaid filled with my memorabilia: a sticker
book, drawing notebooks, and an enormous key chain collection. There’s also a
box with Kurt’s treasures: a jersey, medals, and ribbons.
Over the years we’ve added to the collection, but the
keepsakes don’t always fit in the box. For instance, I have gigantic vintage pompoms that roll around the storage room, making
their annual appearance at Halloween. Kurt has a broken broadhead arrow memorializing his
first successful archery hunt. It was displayed prominently (or not) on the
inside of our storage room wall, for all the other keepsakes to admire.
Three little boys also admired its prominence. All those treasures from
another time, and another life, are so intriguing. Especially my key chain
collection and that wicked broadhead. Awesome!
One day this summer, the boys asked if I would take them spear
fishing. There were several problems with their request:
1) I know little about
fishing.
2) I know nothing about spear fishing.
3) I think it requires a spear gun,
and we don’t have one.
4) These are elementary aged boys. A spear in their hands seems unsafe.
They assured me we did not need a spear gun as they planned
to fashion a fishing spear out of scrap wood. I was skeptical and somewhat
humored. It struck me as cute. So I said, “Tell you what…if you make a spear
out of wood, I will take you to the dock to go spear fishing.”
They sprinted to the garage. I imagined them whittling away
on a 2×4, and I chuckled.
Unfortunately, I greatly underestimated their appetite for
spear fishing. They appeared in my kitchen an hour later. And instead of the
whittled club I imagined, they had fashioned an honest-to-goodness weapon. On
the end of an old broom handle they had J-B Welded a broadhead.
They were ready for me to make good on my promise.
Unfortunately, I could not.
It would have been risky at best, and I
think it would have been illegal. (Not that beating a fish with a whittled club
would have been a good idea either. What was I thinking?)
They were mad, and I felt bad. So we went fishing anyway,
but without the scary spear. Just the regular poles with little hooks and
stinky rubber worms, which, on this occasion, was “lame.”
I chuckled when I relayed the story to Kurt later. But when
I finished, he asked, “Where’d they get the broadhead?”
I had no idea and suddenly felt stupid and irresponsible.
They had fashioned a weapon after all!!
A little investigation revealed the broadhead was none other
than the prized keepsake from the storage room. It had been severed from its
broken shaft with a hacksaw.
That evening, a repentant boy quietly repaired a broken arrow with electrical tape and placed it on our dresser. It was laid on the frayed page of a spiral
notebook. Written above it: “I love you.” 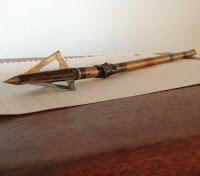 The note and the arrow still sit on our dresser. What could
have been an ugly reminder of an emotionally charged evening is now a sweet
keepsake of repentance and love.
He makes beautiful things out of dust…and broken arrows.
Share
Tweet
Pin
0 Shares