Need a new set of writing tools? Sign up below to receive your Writer’s Toolbox. 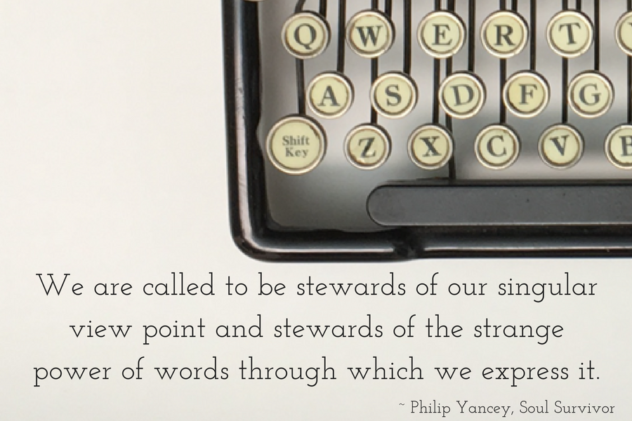 Stewarding the Call to Write

, Philip Yancey takes a moment to point out the somewhat predictable observation that writers are, for some reason, compelled to write about writing.

I smiled when I read that several years ago.  Readers aren’t necessarily enthralled by the process, although I have been delightfully surprised at how many readers are interested in the research I did while writing Remarkable Faith. Yet, here I am, writing about the writing.

But it’s not for my sake or writing’s sake. I write about writing in hopes of passing along inspiration, tools, and an account of how God invited his insecure daughter to join him on the bumpy road toward publication.

When it comes to book publishing, every story and timeline is different, which is encouraging and maddening. We are encouraged when we hear how writers came to hold their own book! But it’s is also maddening because no one’s publication journey can serve as an exact road map or formula. Writers are in a profession where titles like “Five Easy Steps to…”  gain a lot of traction on the web. Ironically, we can’t honestly say there are “five easy steps” to publication.

So I share my story, my timeline (God’s timeline, actually), and my resources to show one way that one person came to publish one book.

If the King commissions you, you must tell the stories.

Sixteen months of living in a state of low-grade panic had run me ragged. I was at the tail end of a very difficult but important season of caring for my three boys (ages 8, 7, 6) and two little foster girls (ages 3 and 2). God’s faithful and attentive hand had rescued and comforted me in so many ways, and I had many stories to share.

Not only that, God had mended my heart through some of the most familiar Bible stories I knew. I’d heard them told hundreds of times in my life, and yet it was as if I was seeing them for the first time.

When the little girls left our home and my three boys went back to school, I hardly knew what to do with myself. For a decade, I’d given my days to motherhood. It was a front-lines mission. A daily battle against snotty noses, sticky floors, and insatiable cravings for apple juice.

Suddenly I had time to read something besides Hop on Pop. I began substitute teaching. I even began to enjoy writing, which was a huge surprise. I’d spent most of my high school and college years trying to avoid it by using large font, double spacing, and recycling reports for multiple classes.

But now I was learning and creating and it was only costing my time. I wrote articles for myself at first. Entertaining myself by recalling the horrors and hilarity of finishing dead last in a 5K. I entertained my friends with a ridiculous stories of my mothering mishaps. And one day I retold a familiar Bible story to myself in writing. When I was done I thought, “Wow. That felt like worship.”

I enjoyed it all. I was an artist trying new tools–narrative, humor, and inspiration. But with such an intense season of mothering in the not-so-distant past, writing felt like a mere indulgence. Other women in our agricultural community were laboring hard in the field or delivering calves in the middle of the freezing night! Several friends were running rewarding businesses. Other were in the throes of mothering medically fragile newborns, or homeschooling multiple children.

It felt wrong to sit and enjoy a creative pursuit. I struggled with the importance and the leisurely pace of creativity.

by Ken Gire. In it, he shared his insight from the beautiful last scene of the old movie Camelot.

Finally alone, King Arthur discovers a zealous young stowaway named Tom hiding behind a nearby tent. Questioning the boy, King Arthur learns that Tom adores the Knights of the Round Table and is the medieval version of a superfan. After informing King Arthur that he intends to fight for the Round Table, King Arthur knights the boy, but then commissions him not to fight but to run behind the lines:

“Then listen to me, Tom of Warwick. You will not fight in the battle, do you hear?”

“You will run behind the lines and hide in a tent till it is over. Then you will return to your home in England. Alive. To grow up and grow old. Do you understand?”

“And for as long as you live you will remember what I, the King, tell you; and you will do as I command.”

And so the boy obeys the King and runs behind the front lines of the fight. He lives. And he sends the stories of Camelot and the Knights of the Round Table to future generations.

The scene resonated with me. I was no longer required in a “front lines” position of foster care or constant motherhood demands. But to simply write stories felt cowardly. Unproductive. Indulgent.

In his piece, Ken Gire writes:

“Whether running behind the lines is an act of cowardice or heroism depends, I think, on several things.

Whose command sent us running.

What stories we write once we stop.

And why we write them.”

His wise and beautiful words showed me that the King of Kings can commission whomever and whatever He pleases. If it pleased Him, He could even commission me to write stories, discover a creative outlet, and incredibly, He allowed me to worship Him through it.

Ken taught me that writing is not a coward’s profession. But it is a privilege, a delightful obedience, and so much hard work. And if the King commissions you, you must tell the stories.

If you’d like to know how that privilege, obedience, and work played out, the following links fill in the story. (All links to books are affiliate links)

A Moment in My Writing Story: The Chapter that Wasn’t

The Story Behind my First Book: When Remarkable Faith is Less Than Remarkable

Timeline to Publication: How (and how long!) it Happened

Mishaps & Mayhem: The Truth about Publishing a Book

Book Launch: What I Learned

Resources for Writers: The Writer’s Toolbox
Sign up below to receive…
🖊 Links to practical articles I return to on how to structure a story, self-edit, and  “show” instead of “tell”
🖊 Book recommendations for writers and storytellers
🖊 Interview a with a publishing strategist
🖊 Guide for writing creative biblical vignettes