Some writers say, “ I always dreamed of writing a book.” But not me. I was always dreaming up ways to get out of writing. My go-to methods were double-spacing, large font, and recycling reports for multiple classes.

Before I went to college I pleaded with four close friends, “Please pray that I will be able to write papers and essays. I hate writing!” Give me rote memorization or multiple choice any day!

So it was as much a surprise to me as to anyone that one day I found myself typing at my computer for two hours.

For a month I had been absolutely taken with a story in the gospel of Luke. It was the story of Peter’s great catch of fish. I’d heard the story many times before, but this time, something hooked me. {Click here to hear a recent podcast where I share the story with Emily Allen of Kindred Mom}

I saw in Peter’s boat an illustration of the gospel. Peter was wowed (and frightened!) by God’s grace and power, and it changed him. 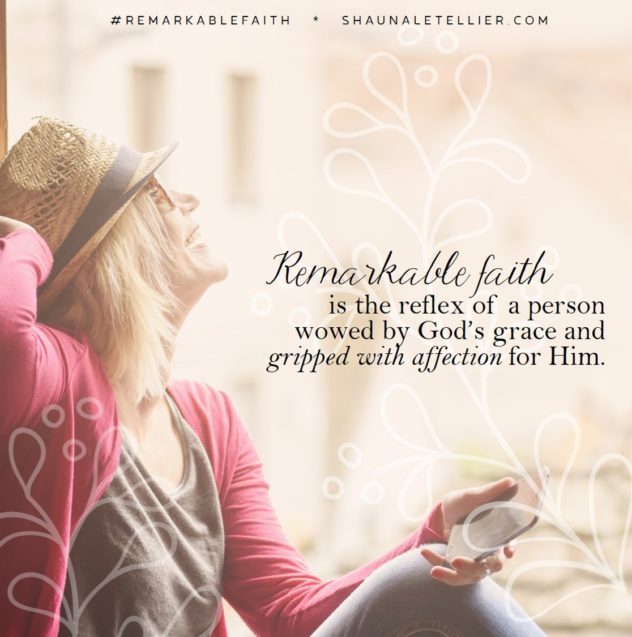 So, while my kiddos napped, I sat down at the computer and retold that story to myself–in writing of all things! I’ve never showed that piece to anyone. I’ve written about it. I’ve referred to it in speaking engagements, but I’ve never published it. Today, however, it’s on the world wide web for two reasons.

1.) To keep me humble. It’s not a spectacular piece of writing. It’s mostly unedited. Beginnings are small and sometimes sloppy because we can’t always see where we’re going. But I’m so thankful I saved the imperfect chapter that didn’t make it into the book. It was a milestone or perhaps a starting point. I’m glad I kept it as a reminder.

2) To remind us that when Christ is our aim and our reward, nothing is wasted. I’ve included it here for you—mostly unedited—to give you a glimpse of how it began.

Zoom in on the Lake of Galilee and there you see Peter, Andrew and a host of others mending and washing their nets–cleaning up and repairing after a long night of unfruitful work. They were getting ready to do it all again the next night.

Near the water’s edge, Peter may have noticed Jesus with a crowd of people threatening to either crush him or push him in the water. And just down the shore with his sandals becoming increasingly wet, Jesus sees a solution in Peter’s boat. Jesus got in and asked him to put it in the water a bit.

Peter took his work with him, and mended and washed his nets in the boat while Jesus taught the crowds from the boat. With no microphone, or even a megaphone, the crowd may have had to strain to hear. But Peter certainly didn’t have to. Jesus was just in the bow and the only competing sounds were the lapping of the water against the boat, the occasional gull overhead, and the far off shop-talk of other fishermen.

When Jesus finished teaching, Peter and Andrew likely thought they were finished too. But instead of asking them to return to shore and thanking them politely, Jesus asked him to “put out into the deep and let down your nets for a catch.” It’s interesting that Jesus tells him he’s going to catch something, when it’s the wrong time of day for catching fish, and as a man, Jesus has no experience in fishing.

Peter protests, but then reluctantly obeys. And when Peter and Andrew had obeyed, they got a visual object lesson of the riches of God’s grace which he lavishes on his people: a net so full of what they were working for that they could not contain it. All their striving to provide for themselves and their families, all their disappointment with being “skunked,” was forgotten as the task at hand became urgent!

It was such a catch that the nets which had just been fixed were again broken!! And now the panic of losing fish through the holes and the rush to get them in the boat so as not to lose one! Finally a call to James and John for help in trying to contain the abundance!! Just when the unimaginable situation seems under control they realize their boats cannot withstand the weight of the catch and are about to sink.

I wonder what Jesus was doing all this time. Was he snickering like a parent snickers when he sees his child scrambling to grab up all the loose candy at a parade? Was he beaming like a parent who sees the joy on the face of his child who has just received an eagerly anticipated gift? Was he helping with the nets and fish in an “untrained” way that allowed Peter to think he needed to instruct Jesus on how to handle the catch? Or was he just sitting there in the bow waiting for Peter to realize the significance of the events of the day?

And finally it all comes together in Peter’s mind…the sermon he’d just heard, the recent whisperings of the arrival of the Messiah—the Son of God—whom the winds and the waves, and reluctant fishermen and apparently the fish, obey. Peter gets a glimpse of Holy Power and falls to his knees in fear on top of a pile of slimy, flapping fish, with fins poking his knees. He doesn’t say ‘thanks’ or ‘wow.’ He admits, “Depart from me, for I am a sinful man, O Lord!”
But Jesus compassionately responds with reassuring grace for the repentant, “Do not be afraid.”

Like carbonation in a shaken soda can, affection, awe, and gratitude, are about to burst out of Peter! And I just wonder if it wasn’t all that difficult for Peter to leave his torn (again) nets, his half sunken boat, and the windfall of a lifetime on the shore in order to follow Jesus.

Oh Lord, allow me to see your holiness so I accurately acknowledge my sinfulness. Please afford me the opportunity to try and contain the forceful outpouring of your grace and find myself wholly unable so that I may unreservedly follow you anywhere with only unspeakable love, devotion, gratitude and awe bursting from my heart.

When I had finished typing I thought, “Wow, that felt like worship.” And I knew I wanted to do it again and again–maybe even fill a whole….book?

Remarkable Faith is a collection of biblical vignettes based on eight unlikely examples of faith in the gospels. We know them, not by their names, but by their afflictions. Seeking Jesus in unabashed desperation, they had nothing to offer and nothing to lose. What did Jesus notice about them? Their affliction? Their social impropriety? Perhaps. But the thing He remarked about—even marveled at—was their faith.
And the faith He found in the first century is exactly the kind of faith He is looking for today. {Click the image below for more info.}