Mary had a little lamb,

Its fleece was white as snow.

And everywhere that Mary went,

The lamb was sure to go.

In nursery rhymes, pithy sayings, Sunday school lessons, books, blogs, social research and Scripture we learn that for better or for worse, our children will do what we do.

Our little lambs arrive in our arms pre-programmed to learn by imitation. When we teach them to speak, clap, or play peek-a-boo, we use their most natural and effective mechanism for learning.

When we exaggerate the syllables “ma-ma,” Baby eventually imitates “ma-ma.” Over and over the power of modeling and imitation plays out as a toddler “nurses” a teddy bear, as a preschooler babbles into a toy phone, or as a little girl slings a bulging purse over her shoulder and lugs it around the house.

And so it begins.

Moms quickly realize our example is powerful, effective, and precious.

It is also frightening, serious, and weighty. I remember the shock of hearing a soggy paintbrush hit the floor and my three-year-old exclaiming “Oh twap!” (Oh crap!)

It scared and sobered me. Shauna, you had better get it all right, because you are being watched and imitated at every turn.

And the burden of setting a good example weighed heavy.

I worried about everything. That I had not spent enough time with them, and that I was doting too much.

I fretted about not explained things well, and over-explaining to confuse.

I was so worried about doing things wrong, I began to depend on my hubby to make up the difference. I decided to distract myself from myself by evaluating someone else’s parenting (My poor, dear husband!).

It didn’t help. I became angry and even more worried.

As I had more babies and less time, the fear that I would not set a good example weighed heavier, because I had already gotten so much wrong.

It was as if I was skittering around a battle field, being taunted from every direction by the things I was not getting right. Some were legitimate. Some weren’t. At the time I couldn’t tell the difference, so I franticly scampered around my family panicked about my example.

Motherhood motivated by fear of setting a bad example is a bad example. It was an exhausting, joy-sucking approach.

Where can a mom get relief from that kind of downward spiral?

As Jesus promised to do, he lifted from Martha this exhausting burden.

But He didn’t do it by sending Mary to the kitchen, and He didn’t get up and help her Himself.

Instead, he said, “Only one thing is necessary.”

And that one thing? Relationship with Jesus, as modeled by her sister Mary. Sitting, not skittering, and listening rather than worrying.

Does that sound like an unhelpful oversimplification to apply to motherhood?

But it’s the change of mind that Christ has given to set us free when we are overwhelmed by the gravity of motherhood.

Jesus called people into relationship–the one necessary thing–with these words: “You, follow me.”

Settle down. Only one thing is necessary. You, follow me.

On the good days—when they nap simultaneously, potty in the toilet, and kiss you good night; when you have a personal prayer time, remain calm, and speak cheerfully—when you feel like you’ve set a good example… you follow Jesus.

Run to Him with thanksgiving and joy. He has given you rest and respite in your circumstances, not because you deserve it, not because you’ve earned it, but because He loves you, and you belong to Him.

On the bad days—when one after another starts puking, when windows are broken, and the car battery is dead, when you’re emotionally void of anything resembling affection; when you’ve snapped, and skipped prayer, when the best thing you can imagine is a silent, solitary nap in your van in a deserted field—when your example seems to have sealed your children’s unsavory destiny…you follow Jesus.

Run to Him with your sin, sadness, and anger. He offers rest and respite. Maybe not in the circumstances of today, but by the rest and peace that comes from knowing you’re loved. Not because you deserve it, not because you’ve earned it, but because you belong to Him.

There are not two different things to do on two different kinds of days. Only one thing is necessary. Jesus said, “You follow me.”

Relationship with Jesus is our most desperate need and our greatest privilege. 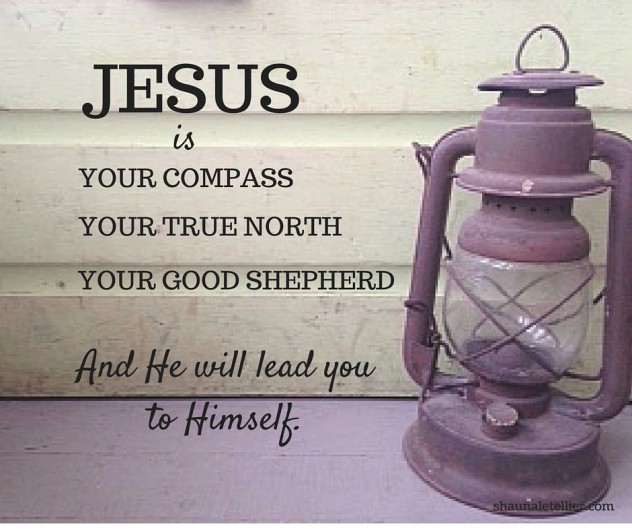 It is also the most powerful example we can set for our children to follow.

To rejoice and repent in the presence of Christ. To model a pattern of turning to Jesus, to thank him for the fun of a sandbox, or a championship win. To ask Him where to find the lost puppy, or where to go to college. To apologize to Him for hurting the ones He loves. To live in relationship with Him.

Dear Mama, here is the light and easy burden that will give you rest: relationship with Jesus is your target. He is your compass, your True North, your guiding Good Shepherd, and He will lead you to Himself.

As you follow Him, you may glance behind you someday to find your little lambs are following you. And you will discover that in His mercy, Jesus has led you to be the example He meant for you to be all along.