What a ridiculous luxury—a portable DVD
player. (Pfff!) I doubted I’d ever use one since I’d vowed long before I had children that I would never use the screen as a “baby sitter.”
Never say never. 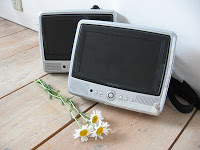 Accurian Dual Screen Portable DVD
Player
(Accurian? Now
there’s a name you know and trust.)
Today we gather to eulogize our beloved traveling companion,
the Accurian Dual Screen Portable DVD
player. The ADSPDVDP (as it will heretofore be called) was born in China,
but imported to the US
in a Radio Shack freight box.
For almost five years it served as a herald of familial
peace. On innumerable road trips, The ADSPDVDP brought relief to irritated parents
as gleeful squeals replaced monotonous complaining with just the touch of its
power button.
No one can deny the tenacity of this little electronic
device. It repeatedly attempted to load hopelessly gouged DVDs. It endured the
excruciating heat of summer from inside a vehicle where the temperatures rival
Hell. It withstood the sub-zero temperatures of the South
Dakota winter which frosted its screen. It did not
even succumb to the beating inflicted by the occasional flailing toddler.
However, for the last two years its function was sporadic.
Each time the power was connected we held our breath until the familiar blue
screen gave way to the FBI warning on every DVD.
Various rubber bands, electrical tape and a band-aid from the first aid kit
sustained it through its last few months. But time, heavy usage, and extreme
temperatures took its toll.
Tragically, all efforts to extend its life failed.
It was preceded in death by several power cords which were
slammed in the car door; its power button whose function we cleverly circumvented
for several years; and its identical twin whose speakers failed upon its first
usage.
It is survived by its case, a host of scratched children’s
DVDs and five grieving humans who are hesitant to road-trip without it.
RIP ADSPDVDP.

No obligatory blog question today. Please join me in a moment of silence.