Please enjoy this excerpt from the introduction of Remarkable Hope: When Jesus Revived Hope in Disappointed People.

Hope. We use the word every day.

I hope it doesn’t rain.

I hope you feel better.

I hope I get to sleep in.

With the best intentions, we cast pleasant desires for ourselves and our friends into the air to vanish. We mean well, but we have precious little control over actual outcomes.

I hope it doesn’t rain. (But there are clouds rolling in.)

I hope you feel better. (But sympathy doesn’t chase away the virus.)

I hope I get to sleep in. (But I have young children.)

Our expressions are also colored with unlikelihood. “Dashed hope” gives way to the announcement that the situation is “beyond hope.” Even when we speak positively, hope is a small “glimmer,” a singular “ray,” or a fine “thread.”

It is a strange and sad irony that our well-wishes are thin and unreliable. In devastation and unmet expectations, we may mistakenly conclude that our hope in Christ is as slippery as the rain we were hoping not to get.

A Christian marriage is destroyed by abuse, addiction, or rebellion. We know parents who “trained up a child in the way he should go” but found themselves speaking through microphones to their beloved on the other side of bulletproof glass, and we become suspicious of the hope Christ offers.

A series of ongoing calamities can prove just as baffling. For me it was a relocation that was clearly God’s direction. It resulted in a nontraveling work schedule that morphed into an eighty-hour workweek. A policy loophole turned a salaried position into an hourly one that didn’t include overtime pay. A rented house depleted our savings for a down payment and didn’t feel like home. To add insult to injury, I found myself grinding up dog food for eleven yelping puppies in my laundry room while my own newborn preemie lay in an Isolette with a feeding tube in an NICU three hours away.

You could insert your story here too. My string of catastrophes may sound minor if you’ve endured the miseries of chemotherapy, testified in court against a family member, or purchased a tiny casket. We have obeyed God and placed our hope in him. We anticipate a life full of blessings tailored to our preferences. Instead of feeling blessed, we feel sucker punched.

Hope is a pillar of our Christian faith. It is not the vaporous wish tainted by doubt that we employ as we blow out birthday candles. When the apostles wrote about it, they spoke with confident assurance. Peter tells us we have a “living hope.”* The writer of Hebrews calls it an “anchor for the soul.” Dictionary definitions include, “An expectation of what is sure (certain).” Biblical hope is expectant certainty. It is knowing that Christ guarantees everything he has promised and purchased. When Paul prayed for the church in the city of Ephesus he said, “I pray that the eyes of your heart may be enlightened in order that you may know the hope to which he has called you.” (Ephesians 1:18) That kind of hope is no evaporating well-wish. It is absolute—a hope that does not put us to shame. (Romans 5:5)

Nothing Less, Nothing More

Hymn writer Edward Mote wrote, “My hope is built on nothing less than Jesus’ blood and righteousness.” That’s true, but it’s also built on nothing more. Perhaps that sucker-punched feeling stems from placing our hope in something besides Jesus. Without realizing it, we may have placed our confidence in our spiritual performance to gain the blessings we prefer. Perhaps we’ve counted on a “promise” that was merely inspirational language. The discovery can disorient us. How can we regain our footing?

Throughout the Gospels we read the accounts of people who hoped in Christ and experienced disappointments ranging from confusion to devastation. Think of the four men who carried their paralyzed friend to Jesus. They laid their silent request before the whole room. Atrophied limbs screamed for help. When Jesus said, “Friend, your sins are forgiven,” every observer was either devastated or incensed. They wanted Jesus to restore the body they could see, but Jesus’ priority was to revive the soul they couldn’t see (See Mark 2:1-12).

When I began scribbling ideas for this book, I could think of a few stories in the Gospels where people felt let down by Jesus. As I studied, I found many more. Pastor and author John Koessler writes, “If the Gospels are any indication, we might even say that disappointment is a certainty. Read the Gospels with all their sharp edges intact. What are they but a record of disappointment with Jesus on a grand scale?” (The Surprising Grace of Disappointment, p. 48) In each of those sharp-edged stories, Jesus transformed disappointment into unexpected gifts. To look carefully at these Bible stories is to see an ongoing pattern of people being surprised by God’s methods in the most drastic ways. His work was rarely what they anticipated but always immeasurably more than they could have asked or imagined.

The following chapters are biblical vignettes: short retellings of times when people placed their hope in Christ and appeared— at first— to be disappointed by him. Eventually, they experienced ultimate freedom instead of physical freedom, a permanent kingdom instead of a political kingdom, a lifelong mission instead of a mission trip.

In each vignette, I have laid the fabric of fiction over the framework of Scripture. Everything God gave in his word is all we need, and storytelling is a powerful tool to help us remember concepts. Jesus used parables often. To teach the value of God’s kingdom, Jesus told of a man who bought an entire field because of the treasure buried there. To demonstrate God’s response to repentant sinners, Jesus described a father’s lavish celebration over the return of his wasteful son. When we unfurl the backdrop of history, humanity, and a few details of sanctified imagination, a concept comes to life.

I have tried to stay close to the Scriptures with these retellings. Where parallel passages were different, I combined the words and accounts of the Gospel writers into one. Where Scripture was unclear on motives, I imagined one I felt was reasonable in the situation. Where Scripture was silent, I sifted through possibilities presented in a variety of Bible commentaries. Then I wove in a little historic, geographic, political, religious, and cultural detail to provide context for the passage.

I operated with the understanding that these Gospel characters had committed much, if not all, of the first five books of our Bible, as well as Psalms, to memory. There are occasions inside these chapters where I have inserted dialogue or prayers. Although they do not appear in the biblical accounts, I assumed the person would be familiar with the Scripture and hymnbook of their day.

My prayer is that through this series of Bible moments retold, we who have clung to Christ will be greatly encouraged. As we observe his faithful commitment to those who hope in him, we will be wowed by his unseen plan, comforted by his words, and revived by his presence. We will finally chime in with Paul and declare that our “hope does not disappoint” us (Romans 5:5). Because when we are downcast and disturbed, our hope is in God, who gives more than we can imagine but rarely what we expect.

You can read each story in my new book when you order ~> Remarkable Hope: When Jesus Revived Hope in Disappointed People 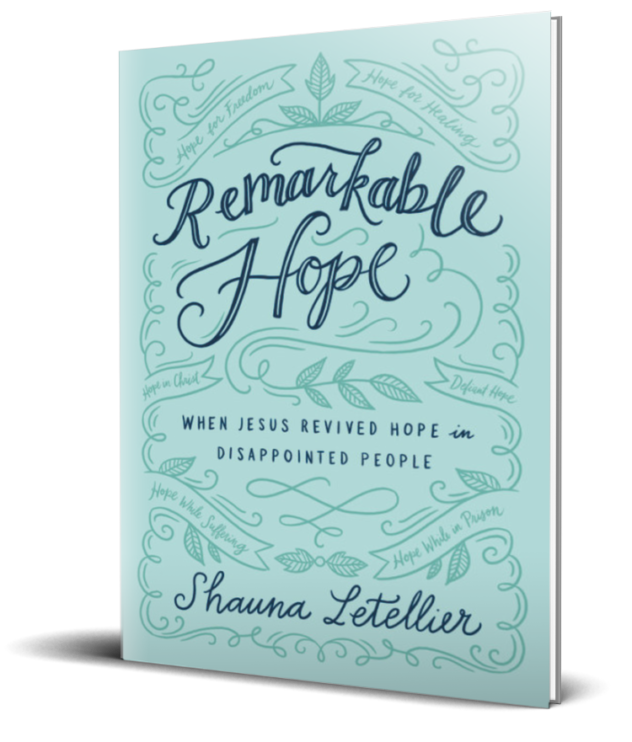 [bctt tweet=”What if hope isn’t a flimsy shred? What if it’s a certainty you can count on? Preview the introduction to #RemarkableHope written by @shaunaletellier and published by @FaithWords” username=”shaunaletellier”]