I don’t want to mention the s-c-h-word just yet, but there are sure signs that summer vacation is winding down.

For instance, our final baseball tournament is in the books. Like ballpark franks on a grill, we sizzled on the bleachers and watched a lot of baseball.

Those little boys in grass stained baseball pants—the ones who made sand castles in the dirt at first base–they grew up. They’re pitching fast, hitting hard and the grass stains are gone because the knees have been ripped right out of the pants due to a nasty slide.

After the tournament, I fell asleep counting pitches. And it didn’t take long…one, two three strikes and I was out. 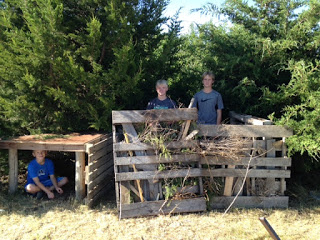 The next day we slept in. For the first time in several weeks we had nothing on the calendar. Ahhhh. A day to relax.

Only apparently we forgot how because no one knew what to do with themselves at home all day.

Finally, around 5:00 when I was about ready to start supper, the boys remembered that cooperation is less exhausting than bickering and, by some miracle, they started to assemble a fort in our trees.

Well, “fort” is what they used to call it. Back when they were building sandcastles at first base. Now that they’re able to name and aim their pitches, they call it a “blind.” And it’s outfitted for all their fall hunting adventures.

When they finally ran outside to put the finishing touches on it by weaving the snipped cedar branches to create an authentic camouflage, I was glowing with pride.

Ahh, yes! I thought as they ran outside. This is what summer is for. Creativity! Mental exercise! Physical work. Repurposing junk lumber and pallets. Hands-on learning!! This is the essence of childhood!
They’d been working for over an hour when I went out to admire the modifications. I took my camera to prove my maternal interest. I wanted to subtly affirm this brotherly cooperation, creativity, and construction.

But when I arrived the work was at a stand-still, and they were slinging words in a verbal BRAWL.
I tried to snuff out the argument, but I was too late. No one was receptive to diplomacy or reason by that time. Two boys quit and went inside to the reprieve of the Wii while one boy stayed and finished construction.

And I spent the next half an hour trying to recover from emotional whiplash.

I thought they’d been learning. Discovering. You know…the whole essence of childhood delusion?

Then I realized, just because they’re arguing doesn’t mean they’re not learning. And I supposed it could be argued that such family feuding is also part of the essence of childhood.

Because in reality they’re still learning. Learning how to argue, compromise, and negotiate. No one said it was effective, but sometimes you have to know what doesn’t work in order to find something that does. For instance, one brother had decided to copycat every phrase his brother said in the argument.

Needless to say, it accomplished nothing.

But I suppose it was just another learning experience of sorts. Another hypothesis to test when vehement yelling hasn’t worked.

Whatever it was I’m starting to think the bickering and fighting is just as much a learning experience as the fort. And eventually experience will prove what the writer of Proverbs meant when he wrote, “A gentle answer turns away wrath, but a harsh word stirs up anger.”

And it’s a great reminder to me that I can teach and talk until I’m fresh out of words, but some lessons have to be learned in the field. Or in the trees building a fort…I mean a blind.