Lately I’ve had a bad case of Bingo Tumbler Brain. 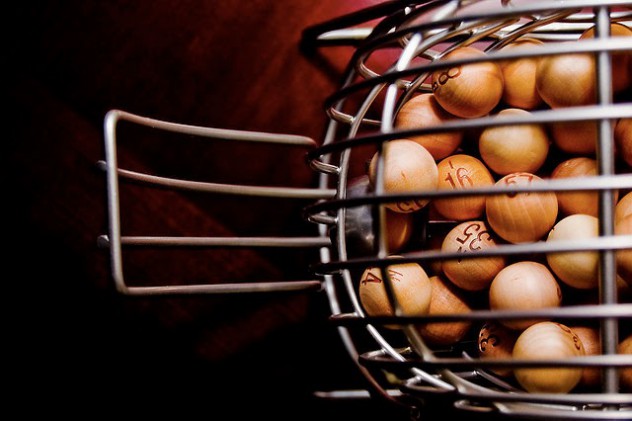 There are all these times, locations, obligations, privileges, people, places, and “don’t-forget-tos” tumbling around in the bingo cage atop my shoulders.

I’ve tried to write them all down on my calendar. I’ve locked them in my phone’s calendar app and tagged most of them with reminders.

I’ve even been confronted by my boys for writing on my hands.

And yet, with all those heroic attempts at punctual organization, time keeps cranking the tumbler and the information goes round and round, mixing at random.

The harder I focus on that one thing tumbling round and round–the more I try not to forget it–the dizzier I become.

Case in point: October 15 was National Take Your Parent to Lunch Day, and it was heavily promoted at our school. The ironic thing is that it’s all up to the parent to make it happen. As with much of parenting, you could call it a gift of grace: It costs the parent time, money, and maybe a little headache. It costs the little recipient nothing, and he delightfully receives it without apology.

The 15th also happens to be Levi’s “special” day. On the 15th of every month we try to do something together. Just Levi and me. Nothing fancy. Maybe a bike ride or a trip to the donut shop.
So when National Take Your Parent to Lunch Day landed on his special day, Levi said, “Mom! This will work out perfectly!”
Indeed.
And in my ever-efficient, not so nurturing, bingo tumbler brain, I was thinking, Two birds with one stone. Check and check!
I wrote it on my calendar, put it in my phone with a 10:30 a.m. reminder to get to Subway before the rest of the parents, because I didn’t want to be bringing a Subway bag into the lunch room when the kids are lining up to leave.
And as Levi hopped out of the car that morning, I rolled down the window and hollered cheerfully for Levi, Spencer, and all the playground children to hear, “Don’t forget to say ‘sack lunch’ since I’m bringing Subway!”
I drove home to bust a few of those “don’t-forget-tos” out of the bingo cage.
Check. Check. Check.  And…whoops. Lots of clothes in the dryer and several baskets to fold. See what happened there? I forgot.
I drug four laundry baskets to the TV, popped in that movie so I wouldn’t waste the $3.70 I paid to rent it, and started folding.
And let me tell you, it was a good movie! In fact I gladly recommend The Book Thief. A friend said she liked the movie better than the book, and that is basically unheard of, so I thought it was probably worth my 90 minutes.
It has all the tragedy that comes with a WWII setting, but with a jewel of a story. And it’s a little longer than your average feature film, which I didn’t realize.
135 minutes to be exact. But I was fully engaged, and the bingo tumbler had come to a full stop.

So I was a teensy bit annoyed when my phone went, “Ding!”

I reached to read my text and almost fainted.

“Levi is in the lunchroom. Are you on your way?”

I texted back: “Have him eat school lunch. Be there in 15.”
Oh yeah… “If you see my other son Spencer, tell him to get a school lunch too.”

I broke into a sweat and started crying. Some demon in my head started laughing and chanting
Loser! Loser! Disgusting Loser!

I grabbed my last best accessory, my hat, and jumped in the car. For 15 minutes I tried to pull it together. It’s just lunch. It happens to everyone. Levi doesn’t mind school spaghetti.

But that same chanting demon was screaming louder, You cannot be trusted with the simplest task!

I ran to the door closest to the lunchroom in hopes of catching Levi before he left the lunch room. It was locked. I knocked on the outside door and a friend who recognized me, even in my panicked state (or was it because of that?) opened the door. I bumbled through my explanation, and she dug two fun-size candy bars out of her lunch bag and said, “Give them these.”
People, that is a gracious friend. When I’m is banging on the school door in a panic, look like a train wreck, and have fouled up a relatively easy task of motherhood, this friend let me in the school, and gave me a gift for my kiddos.
I found Levi in his classroom, called him into the hallway, began to apologize, and started getting weepy again. Which made him tear up. Which he blamed on being poked in the eye earlier and by golly, his eyes keep watering.

I pressed the little candy bar into his hand. He smiled, tore it open, and in two bites it was gone.

He went back to class.

I sat in the lunchroom by Spencer who did NOT enjoy the school’s spaghetti, and then I gave him the other candy bar.

I left the school, but I couldn’t let it go.

The bingo tumbler had started back up, and I kept reaching into my brain to retrieve the right time and location of the next thing I didn’t want to forget.

I felt a migraine coming on.

When I picked them up that afternoon I said again, “Guys, I’m just sooo, so  sorry about forgetting today.”

Levi said, “Why are you so…” but he didn’t know how to finish.
In my head, that crazy demon finished the sentence with several ugly adjectives, but Spencer rescued us all by saying, “It wasn’t that big of a deal.”

And I was reminded again that I have not yet surrendered the full space of the bingo tumbler to a mindset of grace, the message of the gospel.

Honestly, I want my boys to be a little mad at me. That’s what I’ve earned. I want to pay my friend back ten-fold in fun size-candy bars because that’s what she deserves.
And I am struck again by the fact that I am a slave to this world’s economy of “ungrace” as Phillip Yancey has called it. An economy of earning. You get what you pay for. You’re paid for what you’ve earned.
But accepting grace, whether from God or from others, feels terribly unnatural. We’re accustomed to earning.

Unless you recognize how badly you’ve screwed up and that you’re your screw-ups can’t be undone.

That’s when you realize grateful acceptance is your only option.

So when your friend gives you fun-size candy bars, you just shove them in your pocket.

And when I take hold of grace that’s been offered, I find I’m far more likely to offer it to others.