It seems
summer has almost disappeared (way too early!), and the plight of both
Narnia and Arendelle await us…always winter, eternally frozen. Or so it will
seem by January.

But the
seasons aren’t the only things coming and going.
Around here,
we’re racing past some monumental milestones. We’ve endured the long haul from
diapers to deodorant. But wasn’t it just last month I had a pile of baby blue
laundry—sleepers smelling of spit-up and a hundred tiny mismatched socks? This
month, the baby blue load has been replaced with a load of blaze orange and
camo in all sizes.
Just about
the time I wish for time to slow down, I’m reminded it’s passing at the usual
pace.
One minute
at a time.
For example,
my oldest passed me up in height this year. I’m now the third tallest in our
family, soon to be the last, I suppose. He’s made a graceful start to middle
school and shows inklings of maturity more often than he used to.
He’s so grown up! I thought as I drove him to a middle
school activity.
“Mom,
watch,” he said, interrupting my nostalgia.
I took my
eyes off the road to witness him blowing big spit-bubbles and smiling proudly
as they popped and splattered on his lips.
“Gross.”
And he
smiled as if he’d accomplished his goal.
Not too grown up yet, I guess.
After just
three days of school, we contracted a variety of germs which landed us in the
doctor’s office this week. A new policy requires the nurses to ask each patient
whether they’ve experienced abuse or neglect.
I understand
why, but it saddened me that the question had to be asked and that it brought
up issues kids shouldn’t have to be concerned about. Well, they’re growing up. I told myself. They need to be aware of these things.
The nurse
left the room and my middle son said, “I don’t even know what abuse and neglect
are, so I just said no.”
Never
missing a chance to point out he knows something his brothers don’t, my
youngest said, “You don’t even know what abuse is?!…It’s when you’re really
overweight.”
“Um, that’s
obese,” I corrected and realized again we’re not quite as grown up as I thought. 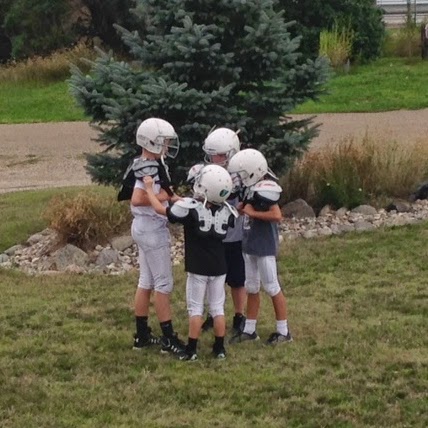 It seems
we’re in a delightful and funny stage of life. Getting all grown up but still
growing.
·
Learning
to clean fish with an electric knife, then dissecting every internal organ to see
what’s inside.
·
Popping
a wheelie, yet still needing TLC after a crash.
·
Outfitted
with all the football gear, yet unable to get it all on by themselves.
Grown up,
but still growing.
I guess it’s
really not a stage at all. It’s a perpetual state.
For Kurt and
me, one of us has just crested the Big Black Hill, and the other has the summit
in sight. But the fact that it’s called “mid-life” indicates there’s the
possibility to live another lifetime.
I guess
we’re supposed to be grown up, but we’re still growing too. And we’re looking
forward to the next milestones as they pass by.
One minute
at a time.
Share
Tweet
Pin
0 Shares