My blonde pigtails wiggled in sync with my rhythmic
coloring. I was hunched over my Kindergarten artwork—an imperfectly arced
rainbow which sheltered six flowers, each corresponding to a color of the
rainbow.
Intent upon the finer points of drawing petals, stems and
leaves, I shaded each flower—red, orange, yellow, green, blue, purple. As I was
falling in love with my sketch of rainbows and flowers, Mrs. Miller walked
behind me and declared flatly, “There is no such thing as a blue flower.”
I turned to look for an explanation, but she was on to
observing the next table.
No such thing as a
blue flower? My face reddened with embarrassment. I filed through my scant
mental index of flowers—rose, carnation, daffodil, tulip—and discovered, she
must be right. I could not remember ever having seen a blue flower.
I grabbed my purple crayon to disguise my ignorant mistake
and colored over what was previously blue. Mrs. Miller would be pleased with my
correction, but the picture looked imperfect to me. A flower for every color of
the rainbow—except blue. Red, orange, yellow green, purple, purple. I disliked
the picture. I could only see the flaw of my disguised “ignorance.”
That statement rattled around in my brain for many years. No such thing as a blue flower. Had God skipped
over blue when he had been painting all the flowers on that third day of
creation? I had truly never seen a blue flower. Still, I kept my eye out for
one.
Each year around Memorial Day I saw plastic blue flowers,
and as though I had knowledge that no one else possessed I silently declared, “Those are not real. There are no such things
as blue flowers.”
But then one spring I exited a super-store through their
garden center. And there on the corner of a table was something that caught my
eye. I picked up the thin plastic planter to see if it was real. It was planted
in real soil. The soil was dripping with water. And out of the soil grew a
vibrant stem laden with blue flowers. I fingered the tag and read, “Blue
hyacinth.”
Poor Mrs. Miller. She had never seen a blue hyacinth. My
instincts of a flower corresponding to every color of the rainbow had been
right. And God had not skipped over blue. But whenever I see a blue flower, I
think of Mrs. Miller.
Until yesterday.
After spending five days in Dallas,
Texas at the MOPS Convention, I returned
home to a dining room table adorned with paper airplanes trailed by banners
attached with yarn and staples. The banners read, “Welcome home, Mom!” And in
the center of the paper airfield was a vase, filled with pink, yellow and—look
there—blue flowers. 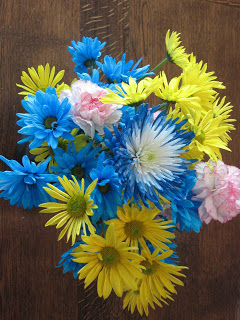 As the fleet of paper planes swirled around the blue flowers
and me, I put my arm around Levi who was nearest to me and said, “Thank you so
much! That makes me feel really special.”
Levi looked up at me with convincing incredulity and said, “That’s
because you are special!”
And with his words the blue flower was redeemed.
A blue hyacinth, a forget-me-not, even a colored daisy,
carnation and mum, no longer conjure up thoughts of ignorance and embarrassment.
God has redeemed the blue flower.
To redeem is to recover, to exchange, to convert.
Though long buried under myth, the truth is recovered.
Shame is exchanged
for affection.
And the blue flower is converted
from an emblem of embarrassment to a symbol of love and redemption.
Redemption is the work of Jesus Christ as God tell us in
Isaiah 61:3:
to comfort all who mourn,
and
provide for those who grieve in Zion—
to bestow on them a
crown of beauty
instead of ashes,
the oil of gladness
instead of mourning,
and a garment of praise
instead of a spirit of despair.
They will be called
oaks of righteousness,
a planting of the Lord
for the display of his splendor.
His redemptive work displays His splendor— even in the
smallness of blue flowers.
This small story of redemption points to a larger one. Where
do you see His redeeming work?
Share
Tweet
Pin
0 Shares