I turned the doorknob with the precision of a safe cracker and closed their bedroom door. There couldn’t be so much as a click-clack to wake any of my five napping kiddos. I was too tired. Tired of meeting needs and feeling needy. Tired of being a grump and dealing with grumpy kids. Tired of trying so hard to be a faithful example and failing so often. Tired of praying for things to get better while circumstances remained unchanged.

I tiptoed over squeaky floorboards toward my living room and accidentally kicked a mound of unmatched socks. Books I meant to read were piled on my side table. My Bible laid opened on the ottoman, with red pen scribbled across the 91st Psalm and a three-year-old’s signature scrawled over the footnotes. 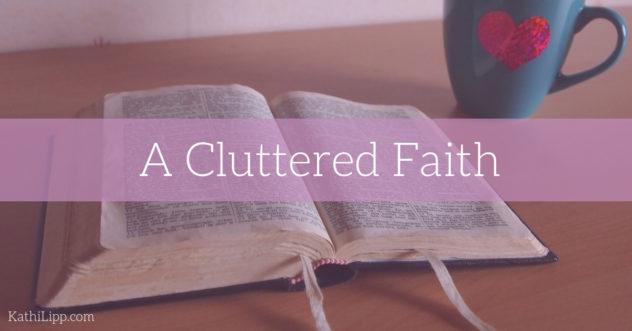 Collapsing in my armchair, I began to cry. Not loudly, of course. I didn’t want to wake the nappers, which made the shoulder-shaking, headache-inducing cry that much more miserable. My overwhelming fatigue required release, but it had to be silent if I wanted to “have my cry” all alone. And I did.

I’d been reading to my kids from our Children’s Bible every night. The disconnect between the heroes of the faith we read about and the disaster of my own faith made me feel like a slimy hypocrite.

In my earliest memories of Sunday school, I sat on a thin carpet square in an echoing church classroom. The industrial carpet was brilliant turquoise and smelled of antique basement. Other children wriggled in close as my mom told the Bible story of a little boy who gave his five barley loaves and two fish to Jesus. With them, Jesus fed a meadow full of people. She distributed colorful postcards with a vivid image of the scene that transported me to that hillside, and I believed.

But over the years, my childlike my faith had become cluttered. I thought if I “did hard things” and if I “let go and let God” and if did things “right” then everything would turn out right. Inspiration plucked from coffee mugs and bumper stickers had stacked up in my soul alongside misunderstood scriptures like so many unmatched socks.

If I was obeying God in the regular work of mothering, then why did it feel so hard?

I had friends who were doing really hard things—homeschooling, parenting large families or medically fragile children, even building orphanages in Haiti!

I was barely making it to church. It wouldn’t be a stretch to say that the free childcare provided by the nursery may have been my main reason for attending church during that season. “Everyone else” was performing remarkable acts of faith and ministry, and I could barely fix supper.

I began to suspect that something was wrong with my faith. I was disappointed with myself, and I was certain God was disappointed in me too. The Bible heroes my kids and I read about were giant-slayers, ark-builders, and sea-crossers!

Followers of Jesus were supposed to be great examples like that.

Thumbing through our Jesus Storybook Bible, I read this shocking statement by Sally-Lloyd Jones, “the people God uses don’t have to know a lot of things or have a lot of things—they just have to need him a lot.”

Now there was a qualification I could meet. But for some reason I didn’t completely trust the “children’s Bible.” Thankfully, over the next few months I read through the gospels in my grownup Bible, and I discover the same clarifying truth.

Throughout the gospels Jesus regularly commented about people’s faith. But they weren’t the people you’d expect. They were some of the most unlikely “heroes” in the Bible. We don’t know their names. We only know them by their afflictions—the hemorrhaging woman, the Samaritan leper, the paralytic. What did Jesus notice about them when they crossed his path? Their disease? Their interruption?

But the thing he remarked about–even marveled at–was their faith. The fact was indisputable: they were people who knew they needed Jesus a lot. They brought him their desperate needs, and he commended their faith.

For many of us, somewhere between the carpet squares of Sunday school and the living room chair, our understanding of faith becomes cluttered. Growing up means doing things yourself, becoming independent, and achieving more. But faith in Jesus is not a matter of great, independent achievements.

The stories of those eight nameless and afflicted individuals taught me that saving faith is a matter of dependence on Jesus.

As Jesus spoke to a father with weak faith, as he lifted a woman from a pile of dirty laundry, even as he angered the religious leaders of his day by rescuing the helpless, Jesus showed himself to be the hero. And the response of the rescued person was to worship and thank him.

Jesus was not demanding that I “Go therefore and be a Bible hero.” And if I had read the stories of the ark-builders and giant-slayers more carefully, I would have seen their “achievements” were because of their dependence on God.

It was a clutter-clearing revelation for me.  We are not responsible to make ourselves a “hero of the faith” or even a perfect example of great faith. Our job is to rely on Christ–to point to him as the hero. He gives rest and relief to weary Christians. Over time you might find that your children, neighbors, or coworkers are looking toward Jesus too because they saw how he rescued you. And by God’s grace you will have become the faithful example God meant for you to be all along.

{I had the privilege of sharing this post at Kathi Lipp’s blog here.}