If your personal suffering has you straining into the distance aching for a shred of hope, or if national conflicts have you wishing for a better country, read on. I’ve invited my friend Glenna to be our guest this month. She’s a singer, speaker, adoptive mom, and a survivor of several long-term trials. She knows a little something about finding hope, and like an experienced guide, she leads us to the certain hope of our bright new day.

Every Sunday night we have movie and charcuterie night at our house. I slice up cheese and sausages, lay out crackers, pickles, dried fruit, and popcorn, and I put stacks of napkins on the coffee table in lieu of plates. Everyone puts on their pajamas, and we crowd around our snacks together on the floor.

Sometimes my husband and I introduce our kids to classic movies from our childhoods, and sometimes we rent the latest animated box office hit. It doesn’t really matter what the movie is about because at some point the plot will take us to a predictable point of disaster, followed quickly by the denouement when everything is put back together again.

On our most recent movie night, we watched an animated tale unfold with the same old classic story line of setting, rising action, climax, falling action, and resolution. It’s often between the climax and the falling action when the story seems to be irreparably broken. You know it will be fixed in the end, but first you have to feel the tension of a questionable outcome. True to form, our movie of the night seemed to be heading in a bleak direction when the protagonists were feared dead and the world they lived in was in absolute shambles. You’re pretty sure the story doesn’t end there, but you wonder how it can be fixed.

When we got to the bit between the climax and the falling action, our ten-year-old turned from the screen to look at us with questioning eyes and said, “Where is the bright, new day? I hate this part when everything is falling apart. We need the bright, new day to show up.” 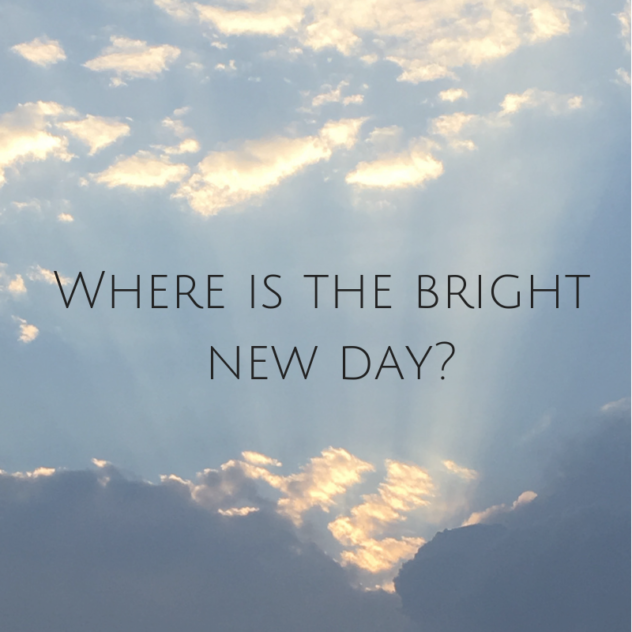 My husband and I laughed because of course the bright, new day was only minutes away. This was an animated film, after all. Sure enough, the story righted itself and ended happily ever after. But I thought my son’s question was an interesting response to a broken story.

Because we’re always trying to think with a gospel lens, I think my son’s question is the one we often have when we look at a world that seems irreparably broken. Just in the last three weeks my husband has preached two funerals. In the last nine months, we’ve buried three church members. People we love have been diagnosed with diseases, lost loved ones, and have faced financial ruin. We watch earthquakes reduce nations overseas to rubble, and we struggle to reconcile the deep political divide in our own country.

Sometimes a psalmic “How long, O Lord?” is all we can muster when we look at the sin and suffering around us. When will the Lord fix a shattered story? Sometimes it’s the suffering we see in the mirror that begs the question. How long, O Lord?

I love that question because it sounds a lot like Where is the bright, new day? It suggests that there is a different ending coming, even if we can’t yet see it. As believers in Christ, we know that suffering and sin and death have only a short-term hold on us. We know that this bit between the climax and the falling action feels long, but one day the Lord will return and we’ll have a denouement like no fiction writer could ever imagine. The gospel story follows the classic story line but comes with a double resolution.

The first climax of the big gospel story occurred at a manger, a cross, and an empty tomb, and reconciled us to God. But the gospel story doesn’t end there. Though the kingdom has come, it is still coming, and the centuries-long tension that begs the question, Where is the bright, new day? will shatter when the King shows up as a warrior to right all the brokenness of earth. He’ll come to judge those who have rejected Him and raise those who have hoped in Him. Death will not have the final say for the people of God. Jesus will. His first victory secured a coming, final one.

Paul says to the Colossians, “When Christ, who is your life appears, then you will also appear with Him in glory” (3:4). Glory is coming, and with it our rest and resolution. Christ is our bright, new day, and His coming is sure even when we find ourselves standing in the rubble of a broken story line. The resolution is sure because our hope is sure. If you’re struggling to put the pieces back together after an explosion of grief and heartache, if you’re staring down your final chapter with fear, if you’re looking for the bright, new day without success, know that for those who are in Christ, the happiest of endings is still coming. He is our bright, new day, and in the end (which will also be our new beginning) He will bring all the resolution our hearts could ever hope for.

Dear friends, we are God’s children now, and what we will be has not yet been revealed. We know that when He appears we will be like Him because we will see Him as He is. And everyone who has this hope in Him purifies himself just as He is pure. (1 John 3:2-3)

{This article first appeared on GlennaMarshall.com on October 8, 2018}

Glenna Marshall is married to her pastor, William, and lives in rural southeast Missouri, where she tries to keep up with her two energetic sons. Glenna is the author of The Promise Is His Presence (P&R, 2019). You can connect with her at glennamarshall.com, where she writes about suffering, biblical literacy, and God’s faithfulness.