I’d begun reading to the kids from Sally Lloyd-Jones’ Jesus Storybook Bible. We’d read about David and Daniel, Moses and Joshua. They were the examples, the leaders, and the heroes of the faith.

I could not identify.

I couldn’t think of any Bible stories of women crying in a pile of dirty laundry like I was. I doubted God had anything favorable to say to a mom so worn out by her own children that she could hardly believe he was still paying attention. And if he was, surely he was disappointed with a person whose only discernible service was wiping up spills.

One night we read the story of Jesus choosing his disciples.

“Who would make good helpers, do you think?” Sally Lloyd-Jones asked. “Clever ones? Rich ones? Strong, important ones? Some people might think so, but I’m sure by now you don’t need me to tell you they’d be wrong. Because the people God uses don’t have to know a lot of things, or have a lot of things—they just have to need him a lot.”

I’d had trouble identifying with the so-called Bible heroes—the giant-slayers and ark-builders. But here I saw myself –“they just have to need him a lot.”

I had nothing fantastic to show God. My desperate prayers, “God, help me!” and honest questions “Don’t you see how I’m failing here?” were proof that I needed him a lot.

But I saw something else too.

As I read my own grown-up Bible, I discovered a woman in Mark 5 who’d likely been crying in a pile of dirty laundry for more than a decade. I found a mom in Matthew 15 so worn out by her daughter that she panicked. And I saw a woman in Luke 7 whose worship was wiping up what she’d spilled.

Was Jesus disappointed with them? No. Theirs was faith that approached Jesus with nothing to show, nothing to prove, and nothing to lose. He commended their faith. 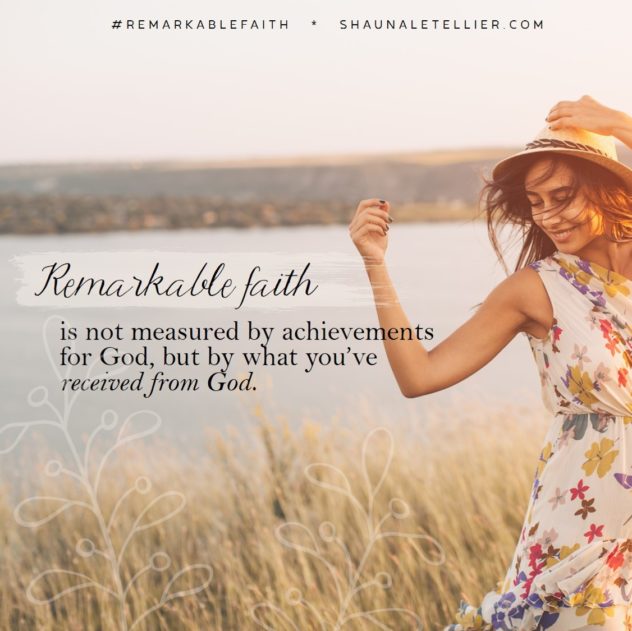 isn’t always visible, and it rarely feels remarkable. In fact, remarkable faith isn’t even measured by what you achieve for God but by what you’ve received from Him. We can be assured that even when no one is applauding or appreciating, Jesus notices remarkable faith. Though it doesn’t feel remarkable, depending on Jesus because we “need him a lot” is the very essence of faith.

[bctt tweet=”When no one is applauding or appreciating, Jesus notices #Remarkablefaith” username=”shaunaletellier”]