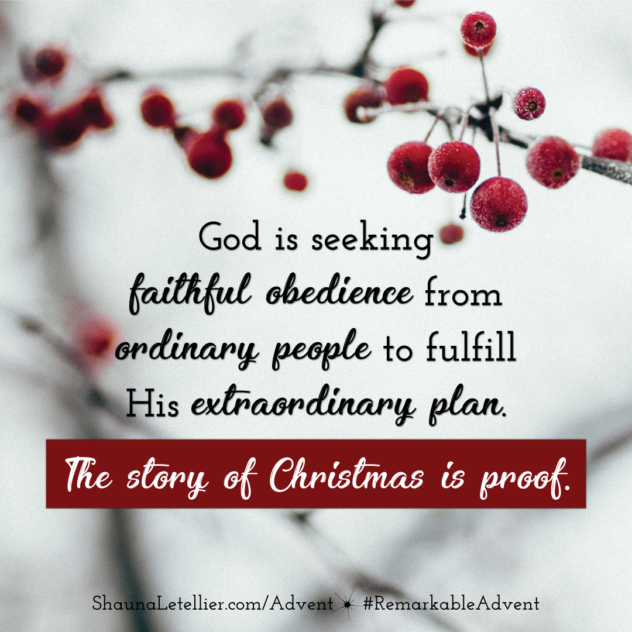 For those of us who’ve heard the Christmas story a time or ten thousand, there is a tendency to slide right through Luke 2 this time of year without much thought.

There it is again. “In those days a decree went out…”

It hasn’t changed since last year — or for the past two millennia for that matter. There doesn’t seem to be much in this story that applies to ministry, work, marriage, or parenthood. Sometimes it’s hard to imagine the Christmas story as anything but nostalgia and rehearsal.

But a closer look at the people we find there might tell us more than we even want to hear.

The people God chose were not worthy of human notice in their era. Yet two thousand years later they are household names, the subjects of stained glass, sermons, and statuettes. Each of their stories points to God who orchestrated the events of their ordinary lives to achieve His extraordinary plan.

Take, for example, Zechariah. He was an ordinary priest, and an old one at that. His was a part-time ministry, since his responsibilities at the Temple came around only twice a year. In the passing of sixty-some years of service, Zechariah was not rewarded with a promotion, or even a divine appointment to burn incense before the Lord — a privilege for which he was qualified, equipped, and so far unchosen. Despite increasing corruption in his place of worship, decade after decade Zechariah served. Such long-term, habitual obedience in ordinary duties drew the attention of no one but God.

Zechariah’s wife, Elizabeth, had married a priest. Not a notable one, but a God-fearing man nonetheless. He wasn’t perfect, but he loved God, fulfilled his responsibilities in the temple, and had always urged her to do the same. They would have made a good parents. Or so she thought. But God had not given her the reward of children. She was righteous and childless. Disappointed and faithful.

Joseph was a twenty-something guy from a denigrated town where nothing good usually emerged. Like every other boy, he learned a trade from his father and continued in the work whether he liked it or not. He wasn’t scouting marriage prospects because even his bride was chosen for him. At a decade past puberty, he was anxious to be married. And for his righteousness and patience he was rewarded with an announcement of scandalous infidelity. His girl was pregnant. Marrying an adulterer would make him an adulterer as well. So to avoid further disgracing his family and his fiancé, Joseph meant to break it off quietly. He’d swallow the embarrassment, follow God’s law, and endure a heartbreaking obedience.

Mary was young and barely a woman. She’d been pledged by her father to marry a hometown guy who would ensure that their future brood of children would grow up under the shelter of both sets of nearby grandparents. She would make a home and he would be the spiritual leader and provider of their little household. No one expected anything but the ordinary course of things from Mary.

Each of these people were ordinary, obscure, and quietly faithful to God. When the eyes of the Lord roamed throughout the earth looking for participants in His extraordinary plan, He found four individuals whose hearts were fully committed to Him (2 Chronicles 16:9). God reached down into their ordinary lives and shattered their small plans in order to create a divine mosaic from the broken pieces.

For the old priest, God granted a once-in-a-lifetime ministry opportunity. While performing that duty, God gave him the news that in the coming year he’d be cradling a son. And not just a son, but a prophet, known throughout the world and centuries as John the Baptist. The forerunner of Christ (Luke 1:8-17).

For the old woman, whose aches and fatigue had long ago caused her to stop begging for children, God granted the biggest surprise of her long life: a resurrected biology, renewed strength to carry a baby to term, and the certainty of knowing that her son would grow to be great in God’s sight (Luke 1:57).

For the young man whose obedience meant embarrassment and disgrace, God rescued him with new instructions in a dream he could never have imagined: a confirmation that Mary was not unfaithful–not even a liar–but an obedient girl whom he should go ahead and marry. (Matthew 1:20)

And for the young girl naive enough to believe God could choose her to carry His son, God granted courage and humility to declare herself the Lord’s servant. Even if it meant being thought a liar, an adulterer, and maybe a single mom, she pledged her life, and the use of her womb, to God (Luke 1:38).

God is still seeking those whose hearts are likewise committed to Him. (2 Chronicles 16:9).

God is looking for you.

For you who are faithful with the little things, who maintain integrity before God in the smallest details of part-time ministry.

For you who are obeying the parts of God’s word that you do understand, even while continuing to study the parts you don’t.

For you who quickly turn away from “small sins” and “big sins” and run to Jesus for forgiveness and help, when people notice and when they don’t.

These are the little things, the things right in front of us, in which we’re called to be faithful. Despite corruption in ministry. Despite life-long disappointments. Despite obedience that requires a disturbing reversal. And despite the perceptions of others.

God is seeking faithful obedience from ordinary people—like you and me—to fulfill His extraordinary plan.

The story of Christmas is proof.