Our July “Story of Hope” is from my friend Yolanda Smith. In a “Yours, Mine & Ours” spin, she and her husband are parents to a combined total of twelve children. She has approximately a million practical tips on how to manage a dozen kiddos, and she reads more books than anyone I know. She is currently revising her first novel featuring historical Appalachian fiction which I’m dying to read.

I asked Yolanda to share her story because in an onslaught of devastation, her hope was shattered. But, as you may expect by now, when her hope was hijacked, Jesus swooped in to redefine and revive her hope in him. 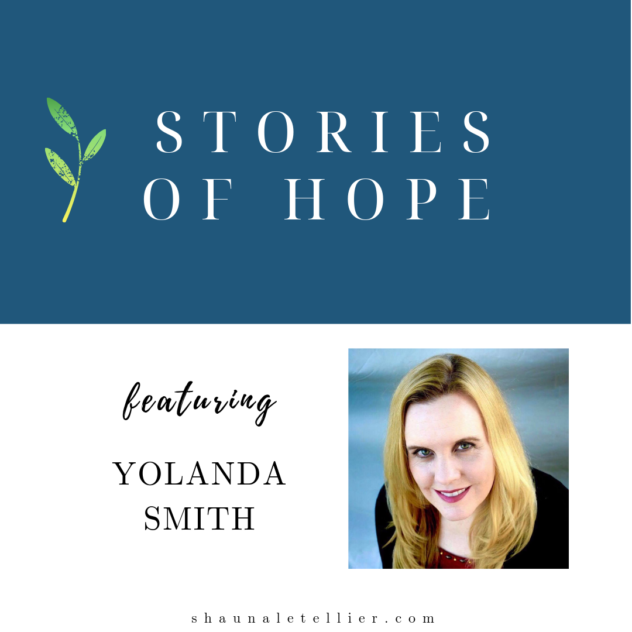 Dolls and stuffed animals lined the foot of the bed as my sister and I held a conversation with our “children.” Like most little girls, we dreamed of the day we’d meet Mr. Wonderful, say, “I do,” wear lipstick and high heels, and pack our houses full of cribs and high chairs. We dressed our babies, shushed and burped them, and told them how much we loved them.

Twenty years later I was living the dream. I’d married a pastor. We had children by adoption and birth, and being a mom was my greatest joy. My wildest childhood prayers had become my reality.

But along with the fairytale came a sudden wave of terror. I’d never considered the possibility I might fail at parenting. What if my children turned out “wrong”? My worst fear was that someday they might abandon Christ and live for the world.

Parenting fears are normal, but mine were rooted in a false belief system. I had married into a cultish sect of fundamentalism that worshiped a transactional god. This god poured blessings on those who diligently followed his precepts and meted out chastisement for folks who strayed from his ways. I trusted Christ for my salvation, but I fell under the pressure of striving to please him and constantly earn his favor by my good works.

These notions played out in my parenting something like this: if I trained my children well, God would bless my efforts and all my kids would grow up to love and serve him. We would be an example of what a godly family should be. When they were grown, they would “rise up and call me blessed.” If I failed in parenting, I would reap the consequences. My children would bring me shame and sorrow, and I’d carry a heavy heart for all my days.

From the earliest days of parenting I recognized I had no ability to produce godly children on my own, and I thought I placed my hope in Christ to get us to the finish line. Nothing on earth was more precious than family, except a family rooted in Christ.

But hope in Christ, when tangled with the subtle skewing of scriptures, eventually becomes a cheap imitation. The thing I hoped FOR—a godly family—became the thing I hoped IN. If my children were spirit-filled Christ followers, it would indicate I had followed the precepts set before me in scripture, and God couldn’t help but be pleased with me.  We would portray a picture of “successful” Christian living and what it meant to wholly follow Jesus. Faulty theology fueled both my fears and my pride.

I had also unwittingly placed my hopes in the teaching of my church. Our denomination believed we were the one group of Christians with the right Bible and the right doctrine. I was clueless how arrogant (and wrong) that statement was.

And when the children of other church members rebelled? Walked away from the faith? Those parents had surely done something wrong or harbored some secret sin. I observed their perceived failures from a distance and worried I might have missed something in my own parenting. I begged the Lord to spare my family from the same outcome. If I asked, he would surely answer.

Then life blew up in my face.

My husband was arrested on criminal charges. He’d done the unthinkable, and overnight I became a single mom with a passel of kids.

We were now a family devastated by sin and crime, separation and shame. My children were hurt tremendously, and the godly foundation I’d hoped to give them had gone up in smoke. I went from being a pastor’s wife—someone others looked up to—to being a criminal’s wife, then a divorcèe—someone despised and pitied.

All my efforts to raise a godly family had backfired, and the promises of God seemed to fall short. I cried out to him in anger and confusion. “I tried my best to obey you, and look where it got me! Is this how you bless those who try to live for you?”

But the moment I became a single mom, stepped away from the fundamentalist cult, and was truly “on my own” the Lord swooped in like the hero I always hoped he’d be. He was husband and father, protector and provider. He showed me the truth that had gotten buried by years of lies. I was insufficient, but he was indescribably sufficient. Pleasing him was not his ultimate goal for me. Rather, it was knowing and enjoying him.  My hope had long since slipped down a glassy slope until it rested on a different patch of ground altogether. And now Jesus tenderly picked up the pieces and showed me he was my place of rest and healing.

'Jesus tenderly picked up the pieces and showed me he was my place of rest and healing.' Today, @yolanda_smith_ shares her story of hope in a series hosted by @shaunaletellierClick To Tweet

He’d never left me, but I had lost sight of the gracious, loving Father he had always been. I’d misunderstood his expectations for me. Ours had been a religion of performance and image protection. And now I lived in freedom and a NEW hope, based on the truth and grace Jesus offered. “And since it is through God’s kindness, then it is not by their good works. For in that case, God’s grace would not be what it really is—free and undeserved.” (Romans 11:6, NLT) 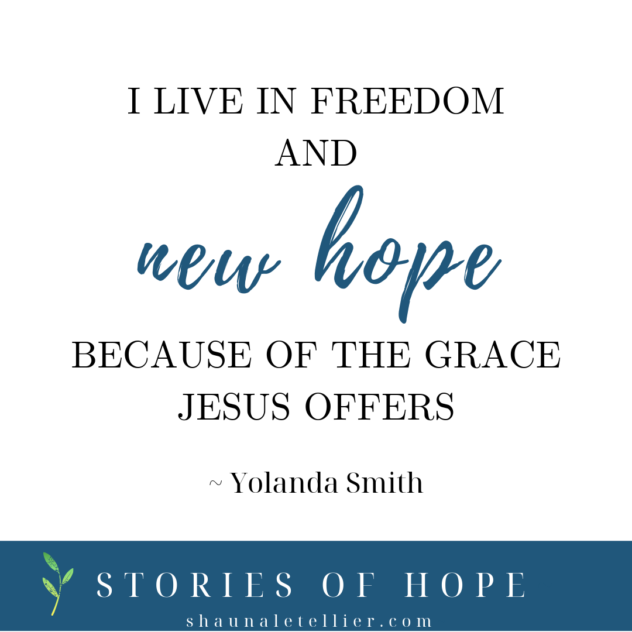 My hope was no longer wrapped up in producing a godly family. I loved my children, whole or damaged, believing or unbelieving, and my identity wasn’t linked to my achievement as a mother. I could give my best parenting efforts to my children and, no matter how they turned out, Christ loved me the same.

Jesus was all I needed, and this hope transcended relationships and outcomes. I found peace in knowing he was sovereign.

Six years ago God allowed me to marry an amazing man, and we have a blended family of a dozen kids. Our children range from spirit-filled to slightly rebellious, solid citizens to desperate wanderers. They look nothing like the godly family I envisioned years ago, but my hope—and God’s love—isn’t based on their performance or mine.

God is the perfect father. And when his first children rebelled, he implemented his eternal plan. That plan included a cross, where Jesus took my guilt and shame and replaced it with peace and assurance of his great love for me. So, whether my family looks “put together” or a shambled mess, he loves and cares for me. Whether my children adore him or abhor him, God loves them better than I ever will, and that’s where I fully place my hope.

'Whether my children adore him or abhor him, God loves them better than I ever will, and that’s where I fully place my hope.' @yolanda_smith_ shares how Christ was the hero when her hope was hijacked. 'Stories of Hope' hosted by @shaunaletellierClick To Tweet

Yolanda enjoys life in the foothills of North Carolina. In a “Yours, Mine & Ours” spin, she and her husband are parents to a combined total of twelve children. Yolanda serves on her church’s worship team, is a freelance editor, and writes in the cracks of life. She is currently revising her first novel featuring historical Appalachian fiction. A former member of a legalistic, cultish church, Yolanda is passionate about helping people find freedom in Christ. She is also enthusiastic about reading good books and correcting bad grammar. You can connect with her on Facebook, Instagram, Twitter or Goodreads.