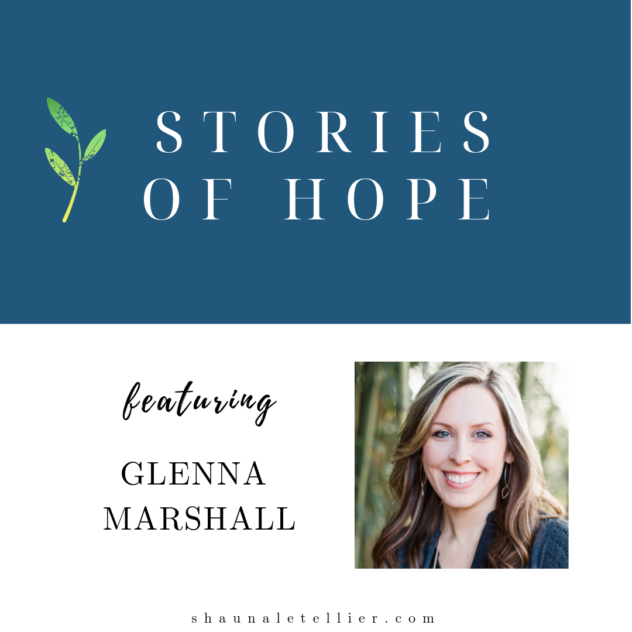 This is the fourth article in our summer series, Stories of Hope–modern stories of people who placed their hope in Christ and felt–at first–disappointed with his plan, purpose, or timing much like the biblical characters of my book Remarkable Hope.

It’s my pleasure to introduce Glenna Marshall (again…she was a guest in November of 2018 as well!). Glenna is married to her pastor, William, and lives in rural Southeast Missouri where she tries and fails to keep up with her two energetic sons. She is a singer, songwriter and the author of a brand new book: The Promise is His Presence: Why God is Always Enough

, which I was privileged to read!

It is a stellar, biblical companion for anyone wrestling with deferred hope or grieving the life you thought you wanted.

Glenna has walked through infertility, chronic illness, and stressful relationships. As the struggles piled up, she discovered a life-giving promise and she’s shared it with us in her book. You’ll be encouraged by Glenna’s story of finding the certainty God gives even while we struggle. She’s talked about it on the Hope + Help podcast. (iTunes)

These are slow summer days, stretching long at the ends from first light to last. We drink them in deep swallows, savoring the absence of hurried schedules before school begins again. We sleep later than normal and wear pajamas longer than we should. The hours unspool without our notice or care. It seems a luxury.

I’ve not had such a peaceful summer in years, and I couldn’t put my finger on the reason until I remembered the shroud of pain that used to wrap me up tight with fear and misery. The familiar heaviness of summer heat has settled over our low corner of Missouri, a wool blanket dipped in boiling water and hung out to steam and dry above our heads. It’s hard to get a good breath when the air is so hot and wet. In being well these past three years, I’ve nearly forgotten the summers past when I struggled to separate the heat of a southern summer with the fire that encased my spine.

It was always hot, inside and out.

Four summers past, I was on the brink of a breakdown. My health had deteriorated to the point I was losing my hair, struggling to remember things, sleeping only an hour or two at night, wrestling with pain like it was my full-time job. Physically, I was wrecked. I was also losing my grip on faith. I’d been in pain for years, but in my sixth year of it I didn’t think I could take it anymore.

What if God never healed me?

I was sorely tempted to hold hands with bitterness. Bitterness is the knee-jerk response to suffering and easily justified when your present and future only look like pain. But bitterness is a difficult root to kill, the kind of plant nobody wants in their garden, a tangle of vines that spreads with ferocity. Bitterness is the kudzu of discontentment. At its best, kudzu cloaks the world in greenery, turning trees into stooped giants with draping, viny arms. It kills everything underneath, but it’s not until winter when we see the degree of damage. Kudzu inhabits what it covers. And I know that bitterness works the same, inhabiting the heart with tightly wound tendrils that suffocate life and light.

I was afraid of the kudzu effects of bitterness in my life. Desperate for relief from the inferno in my spine, I turned with halting steps and faltering prayers to Christ. I opened my Bible with fierce determination to come away changed. The believing part of me knew Jesus was the one to run to, but the doubting part of me couldn’t hold His gaze. I felt like Peter in Matthew 14, sinking in the Sea of Galilee, unable to take my eyes off the choppy, churning waves. But Jesus was Jesus, chastising my weak faith while also holding on to me. His grip was stronger than bitterness, His gaze steadier than mine. His strength overrode my weakness.

When I searched Scripture for some kind of promise that life would get better, I learned that the promise this side of heaven was better than ease or relief.

'When I searched Scripture for some kind of promise that life would get better, I learned that the promise this side of heaven was better than ease or relief.' ~ @glennadmarshall shares her story of hope hosted by @shaunaletellierClick To Tweet 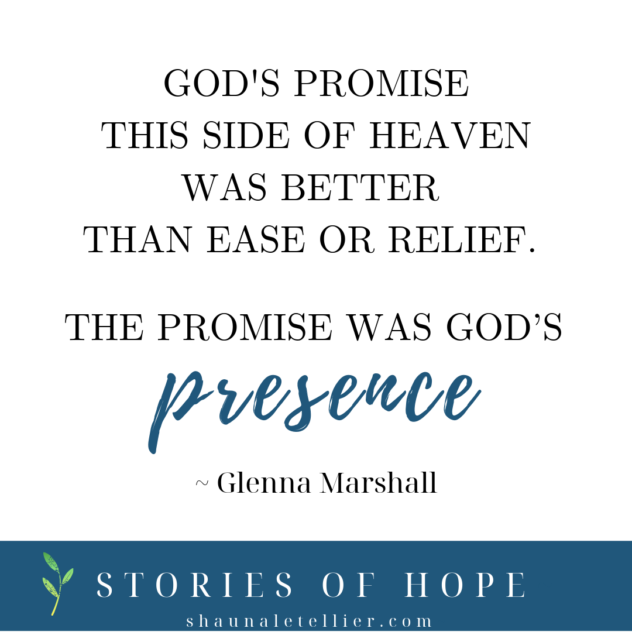 As I walked the floor in pain, His words ran through my mind over and over again.

When you pass through the waters, I will be with you. (Isaiah 43:2)

Nothing can separate you from My love, not things present or things to come. (Romans 8:35, 38)

While I waited long for healing, He held fast to me. He did it in every turn of the page in my worn Bible. He did it when I struggled to pin down the words to pray. He was present. Visibly, no. But in every way I needed, He was present because He has promised to be, even (and maybe especially) in pain and doubt. In the white-fisted vise of pain, I learned that Christ could sustain me. He could hold my gaze and teach me to hold His. He could deepen my faith when He reminded me who He was. And more valuable than a pain-free existence was the certainty that God was always with me.

I wasn’t healed that summer. My pain worsened, actually. It would be another year before I would begin to experience pain’s release. It slipped away slowly, hesitant to leave me, I guess. And then one morning, I woke with a jolt and scrambled to name the startling absence I felt. It was nothing. I felt nothing. Instead of a body on fire, there was just a body. I turned to the clock in a room bathed in bright morning light and realized I’d slept all night for the first time in six years.

When new trials press in so hard that bitterness begins to leak out, I stop to remember the way I called out to the Lord to heal me and the way He responded by being with me instead. I remember the words He spoke long ago that He would be with us in every dark valley of shadow and death. His words of promise and presence. Words I needed then, words I need now. Words that remind me that He is enough for every pain we feel.

'When new trials press in so hard that bitterness begins to leak out, I stop to remember the way I called out to the Lord to heal me and the way He responded by being with me instead.' ~ @glennadmarshall shares her story of hope hosted by @shaunaletellierClick To Tweet 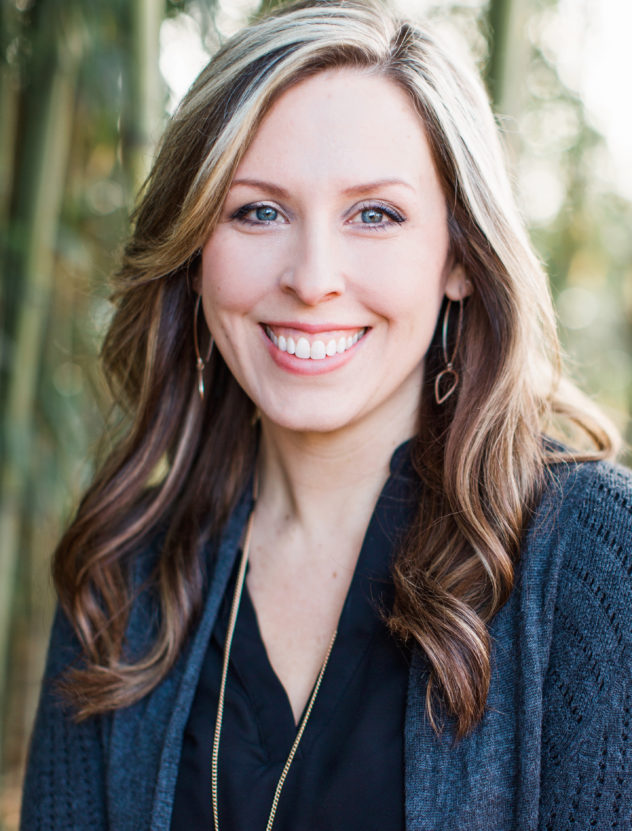 Glenna Marshall is married to her pastor, William, and lives in rural Southeast Missouri where she tries

and fails to keep up with her two energetic sons. She is the author of The Promise is His Presence: Why God is Always Enough