Last week lots of women marched in lots of different locations. They marched in different manners and for different reasons. Millions and millions of women, with different beliefs, opinions, and motivations, held this in common: all of them long to affect change. To influence.

Influence is a sacred trust.

I doubt the interviewer expected her response. She answered, “The world does not know her name.” 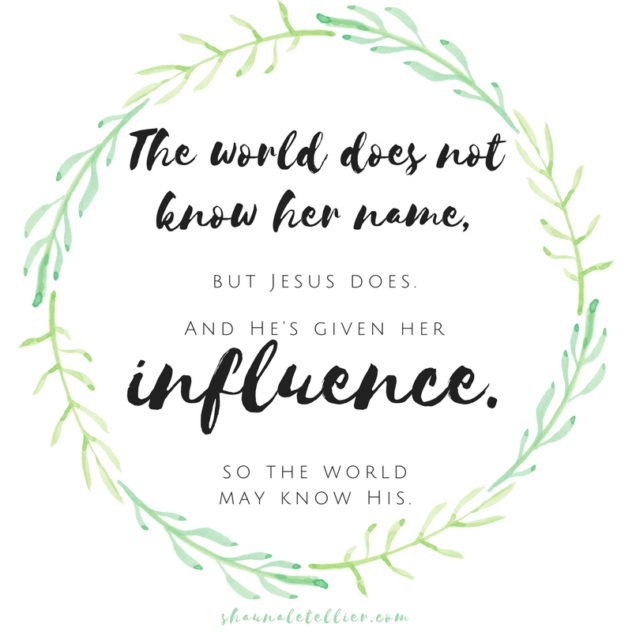 I’ve been mulling over her answer for the better part of a year. Is it possible that some of the most influential women are unknown and unnamed?

Each time, I leave marveling at the women who have served there behind the scenes, accomplishing tasks that few notice. Women who meet a need before they’re asked and desperately hope no one embarrasses them by noticing. Women who mean to influence–to affect change–for the people they bump into every week.

Women whose service is for the Lord.

There is a woman who, despite being injured, raised someone else’s children. One of her greatest joys is taking a meal to anyone in need. Anyone sick, injured, grieving, or just plain busy. She doesn’t do it because she’s afraid of what you’ll think if she doesn’t. No. She gives and gives and gives because a long time ago she was grieving, she was injured, she was busy. She gives out of the memory of her greatest need.

A woman rocks a fussy baby in the nursery. It’s not her baby, nor her grandbaby. She’s just loving a young mom by loving her child. She wipes congealed breast milk off her shoulder with a paper towel because the burp rag is soaked and sour. But she goes right on patting and consoling so a young mom can have 20 minutes to worship. She will be back next week and next month and next year, because when she was a young single mom she needed just a small window of undistracted time to worship the God who sustained her.

There is a woman who married a jerk. A “Christian” jerk. The kind who makes physical loneliness seem like paradise. The woman has overlooked a thousand wrongs, turned the other cheek, and turned her eyes upon Jesus. She is a trail blazer for her small circle of young friends who find themselves gasping in the thin air of unmet expectations. She stretches an oxygen mask over her young friend’s face as she spirals down into the jungle of disappointment. Then she drags her from the wreckage and urges her on toward Christ—who makes beautiful things out of wreckage and disciples out of jerks.

Three influential women who march regularly…right up the stairs of their church, right up the walk of a neighbor’s house, right through the kitchen of a weary friend. None of them has a laudable accomplishment that would land their name on a list of “influential Christian women.”

And yet, that is exactly who they are. Influencing others, one meal, one hug, one tissue at a time.

They are the salty salt Jesus spoke of–almost invisible, but sprinkled among us, flavoring life, preserving hope, and whetting our appetite for Christ.

They are broken vessels whose fractured lives allow the light of Christ to shine through. Jesus has set these women on a lamp-stand called influence, and they shine his light on everyone around them.

They exemplify the poor widow Jesus pointed out, who gave out of her poverty rather than out of her abundance.

The world may not know their names, but Jesus does.

And he’s granted them influence so that the world may know his.