About a week ago, I was super nerved-up over a multitude of tasks that are taking me a painfully long time to complete. To add insult to injury, the boys were arguing vehemently over totally inconsequential stuff.

The precise lyric of a Tim Hawkins parody.

Who’s fishing lure got dropped in the lake.

They went round and round, name-calling, bet-making, and demanding I settle meaningless disputes.

(Not only do I not care about Kevin Durant’s logo, it bothers me that you care so deeply!!)

In a moment of frustration (and perhaps a little panic), I decided we needed make some serious adjustments.
With the help of Google, I found out our local Boys and Girls Club has a summer program to take kids to the pool several times a week. Besides that, they have an indoor basketball court! They could shoot hoops and swim in a supervised environment, and I could have consecutive, uninterrupted hours to concentrate.

It was a win-win.

Until I mentioned it.

The boys stared in stunned silence for about 20 seconds as if I had just announced we were giving them away. Then they began their protests.

I am NOT going!

I named some friends who attend and brought up the pool and basketball court. They were not convinced, but I was not dissuaded.

Then that evening when I walked into the bathroom, I noticed something I never imagined I’d see in my house.
Right there hanging on the wall I noticed the toilet paper with its loose end folded into a neat, centered point. Just the way a hotel housekeeper folds it to let you know they’ve been there to tidy up 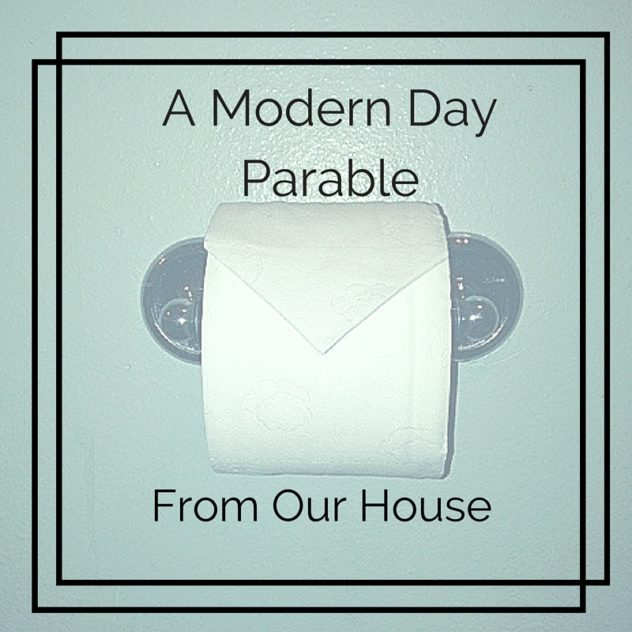 I asked, “Who folded the toilet paper into a point, and why?!”

Finally, one son confessed and added, “Well…I didn’t want to go to the Boys and Girls Club!”

I wanted to die laughing and bawl my eyes out at the same time.

I’m not terribly impressed with neatly folded toilet paper. It doesn’t help our day go better. In my opinion, it doesn’t really qualify as serving or appreciating or being kind. It’s just an external flourish to let someone know you’ve been there. And you folded the toilet paper to prove it.

It’s not critical, and certainly not what I was after.

For a moment I understood with a bit more clarity what the prophet Samuel meant when he said, “to obey is better than sacrifice.” Or, as paraphrased by me, to do the right thing in the first place is better than doing frivolous things to make up for doing the wrong thing.

I would rather my boys make an effort to be kind, to assume the best, and be accommodating to one another.

I’m talking something as simple as,

“Will you get my water bottle?”

But instead, they take their arguments outdoors where I can’t hear and fold toilet paper into a perfect point hoping that will make it better.

It gave me a moment to ponder where I’m trying to cover up disobedience with external flourishes which are fancy and noticeable, but far from essential. And to evaluate, on the other hand, what is essential to glorify God and benefit others.

The truth is, there is probably more tidying up to do in my heart than in my schedule. Which, most times, means I get to stop doing something rather than add something to my list.

I get to stop stewing in anger.

I get to stop worrying about things I can’t control—which, incidentally, is just about everything.

I get to stop policing opinions.

And with those things nixed from my list, I’m free to spend that energy doing what I should have done in the first place: to love the One who rescued me and point others toward Him. In a word, obey.

And that’s a relief for everyone. Because the last thing we need is one more to-do list item that amounts to nothing more than a neatly folded square of toilet paper.