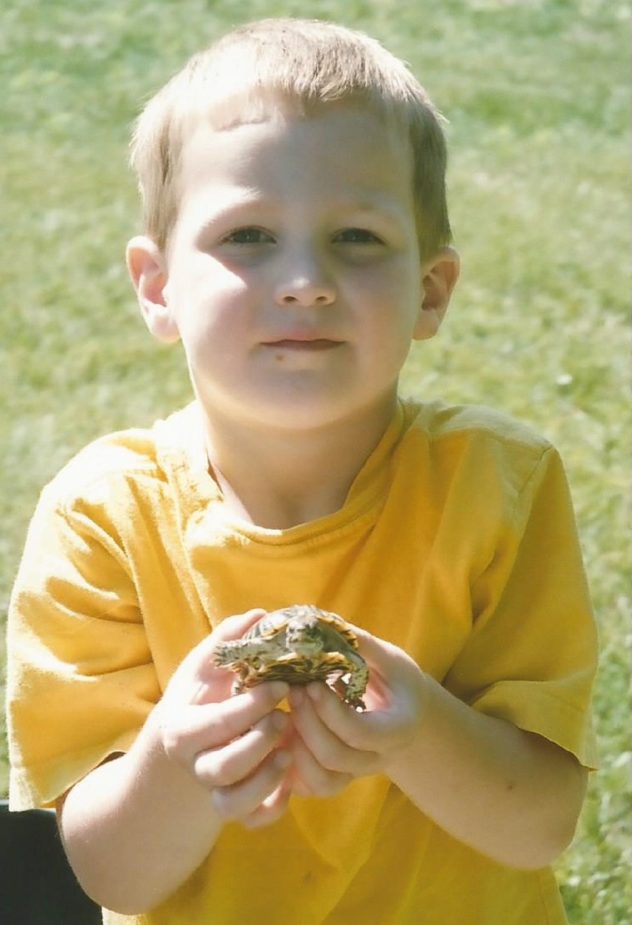 The turtle and his primary caretaker.

The first time my boys captured a painted box turtle and put it in a five gallon bucket, I felt like I had hired a babysitter. For free.

For hours the boys watched that poor turtle try to claw his way out of that bucket. He was picked up, turned over, and dropped. Occasionally they’d dash into the house for a handful of lettuce, grapes and even animal crackers, to see if they could coax their captive babysitter into eating something right before their very eyes!

The turtle wasn’t interested in eating, though. He only wanted out.

But amphibious claws against the inside of a plastic bucket don’t get much traction, and he made very little progress toward his goal.

Eventually, we carried our traumatized pet in his bucket off to the lake. Not only did he turtle-run from the bucket, he swam away, and achieved his goal. Escape. Freedom. The whole, big, beautiful underwater world he was made for.

Last January, I wrote about my own little goal (which you can read about here). I wrote a book proposal and, with the extraordinary help of my literary agent, we submitted it to various publishers.

At times I’ve felt like that turtle. Working toward a dream, but making about as much progress as a turtle trying to climb the wall of a plastic bucket.

Two weeks ago, however, I had the privilege and pleasure of signing my first book contract!

And it wasn’t an internet scam. It’s the kind of contract where the publishing company has a name you recognize, authors you’ve read, and real, live, friendly editors to speak with.

I am terrified and excited. I think that means I’m terri-cited…which almost sounds like an essential oil.

I’m still moving kind of slow, but I’m out of the bucket. I have a better view of where I’m headed, and I’m plodding toward a manuscript deadline this fall.

And while “slow and steady” might not always WIN, by God’s grace, it always finishes.

Thanks to each of you for your encouragement along the way. You didn’t laugh and point when I was circling around the bottom of the bucket looking for the way up. Instead, you’ve asked, prayed, read, commented and shared thoughts and encouragement.

And while it wasn’t lettuce and grapes, it has nourished hope, fueled tenacity, and given me the tentative courage to keep moving.

And for that, I am gratefully indebted to you.

Thanks for joining me on the adventure.

P.S. If you’re interested in book progress updates, occasional prayer requests, the official title, the final cover, and, of course, the first opportunity to pre-order (Did I just type that!?!), be sure to subscribe over there on the sidebar. You’ll get new blog posts in your email inbox as well as book info that’s best shared in an email and not on the world wide web. 🙂