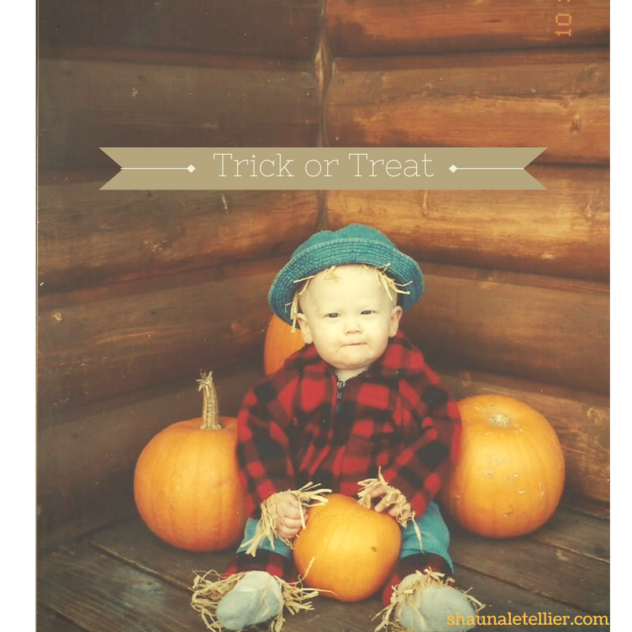 Before pinterest I had to come up with kid costumes on my own. And since visual design isn’t one of my strong suits, I came up with exactly one costume. All three of my boys wore it for the year or two that it fit. Only every year, it seemed at least one of them had a fever or some version of the flu, so I never really took them out in their adorable scarecrow costume. A picture on the deck was a far as we got.

So when I took my youngest son trick-or-treating last year I was enthralled with all the creative costumes.

I counted about 27 princesses and nearly as many ninja warriors. Not to mention a walking vending machine, and a few pixelated Minecraft characters. There were little girls who felt perfectly secure as princesses and insecure teenagers who were “too old” to dress up, but still young enough to be lured by candy.

There were also the scary and gross costumes. Downright disgusting stuff that made me want to rush and cover the eyes of every tiny trick-or-treater on the street.

Hordes of people trickling down sidewalks and streets stumbling over cumbersome costumes, running door to door, and some limping and growling.

I stepped back for the wide view.

Eeeeks! Such a strange scene!

It occurred to me at that moment that Jesus’s earthly ministry was probably a little more like Halloween than I like to imagine.

I thought of Jesus and his disciples getting out of their boat when they were startled by a mad man running and screaming at them. Broken chains dangled from his limbs, and his naked body bore a web of scars and scabs from a hundred self-inflicted wounds (Mark 5:1-8).

Another time, after a horrific night at sea when his disciples mistook him for a ghost, Jesus stepped ashore at a place called Gennesaret. When the people there recognized him as the one who had fed a multitude on the other side of the lake, they brought all their sick friends, family, and neighbors to him.

They came in hordes from all over the surrounding country begging him. (Matthew 4:23-25)

And what did Jesus do when the helpless and harassed came running down the streets and shores to him?

He had compassion on them.

To him they were like sheep without a shepherd, and as The Good Shepherd, he welcomed them.

But he wasn’t content to simply welcome and feed them. He also taught them, spoke about the kingdom of God, healed their sick and changed them. (Mt. 9:35-36)

I don’t know if Jesus would have had a bowl of candy at his house or not. He never claimed a permanent earthly address. But I know that if he had, the line at his place would have been long because Jesus drew a crowd everywhere he went.

The line wouldn’t have been moving fast either. It was his life’s work to address physical and spiritual needs, and that takes time.

I suppose His disciples would try to hurry the line or disperse the children. Perhaps parents would urge their children to “skip that house.” But I just bet Jesus would tell them all, “Whoever welcomes one of these little children in my name welcomes me.” (Mark 9:37) “Let the little children come to me, and do not hinder them, for the kingdom of heaven belongs to such as these.” (Matthew 19:14).

Jesus was never one to miss a teachable moment.

Whether we admit it or not, without Christ we are the spiritually helpless and harassed. It’s just that in the 21st century we’ve figured out how dress it up and rename it so we don’t have to be thought beggars–people unable to earn what we desperately need.

But the kingdom of heaven belongs to people like that.

Our best hope is to come to Jesus with empty hands, offering him nothing as payment for what we need and cannot buy.

And to everyone who receives him, to those who believe on his name, he GIVES the right to become Children of God (John 1:12). No matter how you’re dressed. No matter how sick you’ve been, or how pretty you feel. He gives to everyone willing to receive what he is handing out.

For the kingdom of heaven belongs to such as these.