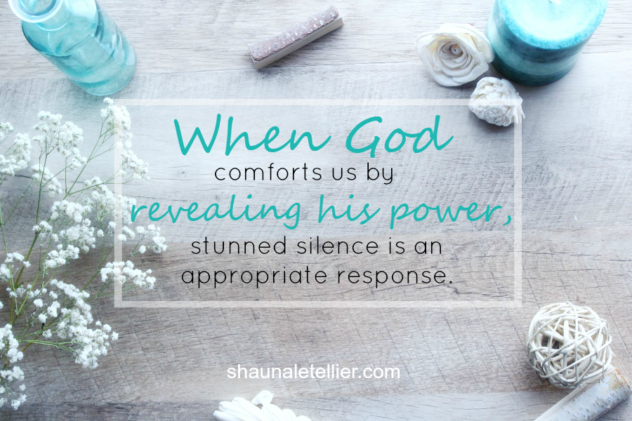 Andrew couldn’t hear a thing over the howling wind and crashing waves. But he did see Jesus roll off the bench after Phillip shook him.

Rain pounded the deck inside and collided with the waves outside. Andrew’s hands cramped from his failed attempts to steady the thrashing boat without breaking the oar Peter had abandoned to unrig the sail.

As the boat rose on the next crest of a surging wave, Jesus gripped the ledge that had been his small shelter and called into the raging wind, “Quiet!”

The sky sucked in its angry breath.

The swell diminished and set the boat down to bob on the rollers, which turned into ripples, which flattened into calm.

And for the first time since that first gust had whipped, they saw the outlines of the other boat, sails down, mast snapped, bobbing on the silver surface of Galilee.

The remains of broken waves rolled off the boat in streams. Chaos draining down every incline. The boat was heavy and the lake’s surface just a hand’s width below the edge of the boat.

Clouds thinned, and Jesus turned away from the moon peeking through. He looked at his soaked and terrified friends. Each was drenched in rain and fright, still clinging to sails, ropes, and splintered oars.

“Where is your faith?” He raked hair out of his eyes. “Why are you so afraid?”

But no one had an answer.

“Do you still have no faith?”

Jesus settled back onto the bench where he had slept and rang out his cloak.

Perhaps they were all panting and out of breath from fear and exertion, and so they didn’t answer.

Perhaps they thought it was a rhetorical question. After all, wasn’t it clear why they were afraid?

In a rare moment for Peter, he had no immediate response. He didn’t ask to jump in, didn’t draw his sword, and didn’t proclaim loyalty. He kept silent.

We often accuse God of indifference and then gasp when he demonstrates his care. Perhaps embarrassment over our own audacity to accuse him keeps us mercifully silent. While we’re silent, our accusations and astonishment have the chance to untangle.

Silence can be uncomfortable. We sometimes comfort ourselves by packing the silence full of nervous babble. But when God comforts us by revealing his power and his care, stunned silence is an appropriate response. It is a reflex of obedience to be still and know that he is God–a quiet kind of worship.