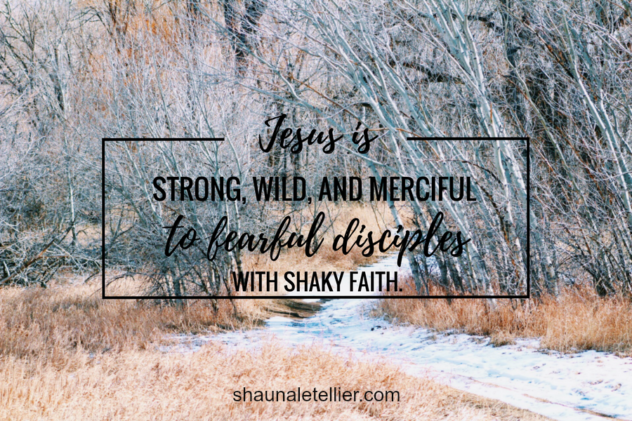 Andrew peeled his fingers off the oar and examined his pruned and blistered hands.

Why were we so afraid!?  Wasn’t it obvious? Because I thought we were going to die!

Water quietly lapped against the boat and shut him up. It seemed silly now. There was no danger.

The silvery moon relit the boat as the clouds dissipated. Peter untangled himself from the sail and dropped the soggy mass of fabric.

They looked at one another in the moonlight with silent questions. Then they looked at Jesus. He’d wrung out his cloak into the water sloshing at their feet and draped it over himself again.

Andrew and the rest stared at him. One by one they moved about the boat to survey the damage. “Two of six oars left.” Peter said. It was merely distraction.

“Who is this?” Andrew whispered to Peter as he watched Jesus stretch out on the leather bench again.

Phillip rolled a stray piece of the shredded sail and whispered from behind, “What kind of man is he?”

Andrew, didn’t know what to answer, but he said what he knew for certain.

“Even the wind and the waves obey him.” Andrew shuddered.

They clearly had no idea.

Just when the disciples think they have Jesus and his kingdom mostly figured out, just when they think they understand what it’s going to be like, Jesus moves on to the next lesson.

Strong faith in their own understanding, their ability to sail, their willingness to “help him out” is a pitiful life preserver when death is near.

When we witness Christ’s power we have the opportunity to reevaluate who we actually believe he is. And to be certain, he’s not merely a weak God along for the ride, in need of our help.

Who in the world is he?

He is strong, wild, and merciful to fearful disciples with shaky faith.

He is the untamable God who leads us into storms, rides them out with us, and delivers from the destructive waves of unbelief.

He is God, who came into the world to give glimpses of who he is.

When the storm is finally over we know, without a doubt, he is more than we’d ever imagined.