It  sounds almost the same in Latin based languages.

It’s the language of a baby, or perhaps a toddler. One repeated syllable packed with endearment. 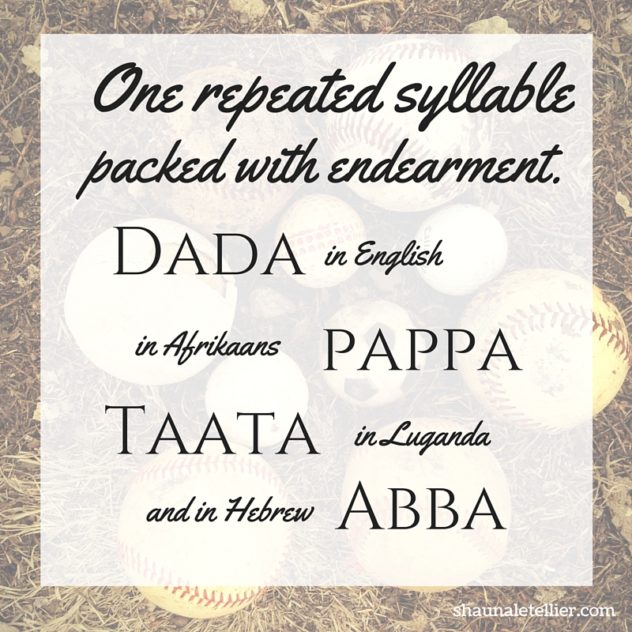 It’s one of the first words spoken by a child to one of the most familiar faces in his small circle of recognition.

A baby knows nothing of where Dada works or what he does when he’s not at home. A toddler has no capacity to understand accounts receivable, fuel injectors, plumb lines, metadata, crop yields, or market trends.

But a toddler with a loving father, speaking any language in the world, knows that repeating those two syllables, is to gain their father’s kind attention.

With joy the baby calls out “Dada” and is lifted high into the air.

With tears the child thrusts scraped knuckles toward his Dada, and is swept into his arms.

With the day’s exhaustion, he climbs onto Dada’s lap, to be snuggled on his chest. His little head tucked under a bearded chin, catching Dada’s warm breath in his hair.

These are the syllables and the images the Apostle Paul evokes when he speaks of the God of the Bible as our Abba. The Father who receives and adopts ragged sinners who turn to him.

In our grown-up pride we may be slow to confess how little we know of him. After all, we know everything about anything we can Google. Maybe you know a zillion Bible verses by heart. Maybe you know how to say Papa, and a thousand other words, in five languages. Maybe you’ve spent a lifetime studying and getting to know God through his Son Jesus.

In many ways, you might be a grown up. But the fact remains, followers of Christ are his children. He is our Papa.

As a toddler depends on his father to hold, to carry, to teach, and to love, we are privileged to depend on God for the same.

And, “If dependence on God is the goal, then weakness is an advantage,” as Allister Begg has said. The simple syllables are a constant reminder of our weakness. And in our dependence we are privileged to invoke his name as a child.