Admittedly, this is a
rather ho-hum post. Confirmed as such by my first editor who only tells me the
truth about everything I write. His bold and witty truth-telling has saved you from
reading some stupid, boring, wordy stuff. And he may not approve of
this snoozey post.
But I’m politely ignoring
him.
Because of my poor history
of keeping New Year’s resolutions I’ve pretty much stopped making any. Except
this one: Keep track of books I read.
And when a resolution is
kept at all, not to mention for two consecutive years, I think it deserves at
least an electronic commemoration in the blogosphere.
So, without further ado, in
the order I read them, I present… 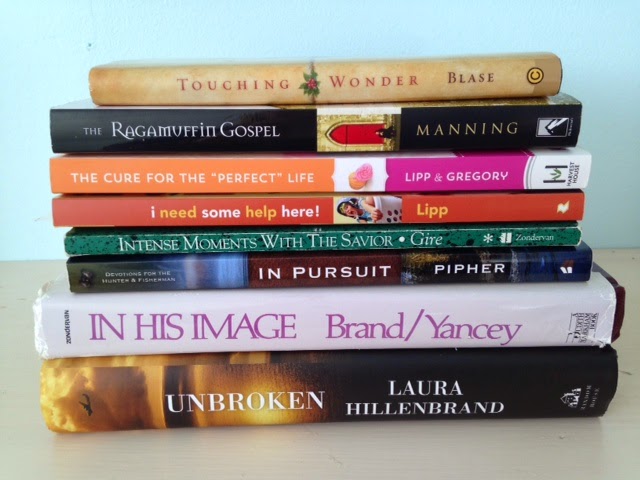 Books I Read in 2014
Son of Laughter, Fredrick Beuchner (A strange read for me.
Life in the Old Testament was not neat and tidy.)
Die Empty, Todd Henry (Awesome title. Kind of
self-help-y, but many ideas for making the most of your life and time.)
Desiring God, John Piper (Not an easy read for me, but an
awesome paradigm shift for Christians! So glad I read it.)
Pain, Perplexity and Promotion: A prophetic look at the book ofJob, Bob Sorge (Recommended by my brother, the
author draws principles on suffering from the book of Job.)
Beautiful Outlaw, John Eldredge (A bit outside the box, but I
really enjoyed his perspective on Jesus.)
Unbroken, Lauren Hillenbrand (BEST BOOK EVER. This is
the true story of Olympic runner and
WWII POW Louis Zamperini. I could not put it down!! Regarding the movie: I was anxiously awaiting the movie knowing
there was NO WAY they could fit the entirety of Louis’s life into two hours. I
liked the movie, but it was a “skeleton” presentation of the events.
What else could it be? Highlights basically. So 47 days at sea doesn’t seem so
bad in the movie. And “The Bird” is a violent jerk in the movie, but
they do not (and probably cannot in order to appeal to a PG audience) portray
his vile, evil, nastiness. Some folks were offended they ended the movie
after he returned from war and didn’t include his conversion at a
Billy Graham crusade. But there was NO WAY his post-war life could have been
portrayed well by tacking it on to the end of the movie. It deserves its own
movie! The Billy Graham has done just that. Click here to see.)
Seabiscuit (abridged), Lauren Hillenbrand (Had to read
more of her work after Unbroken. A
well written, interesting, true story, but it couldn’t compare with Unbroken.)
The Old Man and the Sea, Earnest Hemmingway (Read this because I
thought I should read a “classic.” Though it feels heretical to say, I did not
enjoy it. At all.)
The Greatest Salesman in the World, Og Mandino (Beautifully written tale with
much “biblical” advice without being overtly preachy.)
I Need Some Help Here: Hope for When Your Kids Don’t Go According to Plan, by Kathi Lipp (I contributed a small story to this book and
enjoyed reading the finished product and blogged about it.)
The Cure for the Perfect Life, Kathi Lipp and Cheri Gregory (Contributed a
small story to this book as well and enjoyed observing the “birth” of a book. I blogged about it as well.)
The Ragamuffin Gospel, Brennan Manning (Read this after watching the movie Ragamuffin. I loved the movie about the
life and work of Rich Mullins and the book offers much food for thought
regarding God’s fierce love.)
Intense Moments with the Savior, Ken Gire (I love everything I’ve read from
Ken Gire. This was one in a series where the author retells the Bible stories
where Jesus had some intense moments.)
Pearls in the Sand, Tessa Afshar (Fictional account of the
biblical Rahab. So-so.)
To Kill a Mockingbird, Harper Lee (Why did I wait so long to read
this stellar work?)
In Pursuit, Zeke Pipher (A devotional for sportsmen that
I read to my boys. Even though I am not in the “target audience” (ie. sportsmen)
I do know a few!)
Touching Wonder, John Blase (Poetic, fictional reflections on
the Christmas story. Sixteen beautifully written vignettes. A neat book to read
annually during Advent.)
Gods and Kings, Lynn Austin (A fictionalization of the
Biblical account of Israel’s surly kings. I liked it and hope the read the next
in the series.)
In His Image, Dr. Paul Brand and Phillip Yancey (Amazing
insights and allegory between the human body and the body of Christ. I love
this book! To be honest, I’m only about half way through, but I thought it
deserved a place on the list.)
Do you have any recommendations for me for 2015?
Share
Tweet
Pin
0 Shares