It seems like I’ve mentioned my love for music recently.

As a word-lover I especially love meaningful lyrics. So when enjoyable music and thought provoking lyrics bump into each other, I swoon.

This week as I was buzzing around my kitchen with my Ellie Holcomb Pandora station playing, I heard All Sons and Daughters singing Dawn to Dusk and I was smitten with one particular lyric: 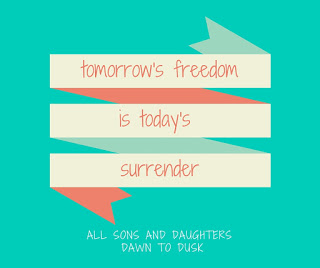 Ironically, I keep applying this profound truth to what seems like mundane and annoying facets of life.

My steady two-year weight gain for example. Yikes. Did I just say that? That was embarrassing.

But now that it’s out, it’s a reminder that tomorrow’s health, is dependent (in part) on surrendering thoughtless, excessive eating today. Whoah! That was awkward. NEXT…

My kids keep hearing me sing those five words but what they don’t know is that I’m reminded to apply it in parenting as well. Certain behaviors are easy to ignore when I consider the time and effort I’ll have to surrender in order to deal with them. But tomorrow’s freedom, for me and for my kids, is dependent (in part) on my surrendering the time and effort it takes to address it today. Big sigh.

And then there is that pesky issue of my cherished sin. The little sins I love to indulge, just a bit. An appetite for gossip. Creative insults. Lashing out. Hating rude people. “Acceptable” sins.

But cherished sin is dangerous, because the more I feed the little creature, the more it grows. And next thing I know, I’m not holding its leash anymore. It is holding me. Demanding to be fed more and more, and I become enslaved to a master of my own making.

How do we get there? We endure a little discipline. Sometimes even self-discipline.

“No discipline seems pleasant at the time, but painful. Later on, however, it produces a harvest of righteousness and peace for those who have been trained by it.” (Hebrews 12:11)

It’s painful. Or at the very least, tiring.

Perhaps the first step is recognizing the creature that’s secretly been holding us captive. Then, for those who train–repeatedly exerting the emotional muscle that resists the weight of excess, or apathy, or “acceptable sins,”–later on, it produces peace, righteousness, and ultimately freedom.

And it is for freedom that Christ has set us free. (Gal 5:1)